A couple, fine, Sierra Peaks Section leaders were completing the SPS list, climbing a total of some 247 peaks, on this particular summit, this weekend. This quite excellent two had led many a fine peak climb, and have an outstanding talent for route-finding, safety and fun. Many of the active SPS leading membership were to attend this climb, with a big celebration Saturday night. 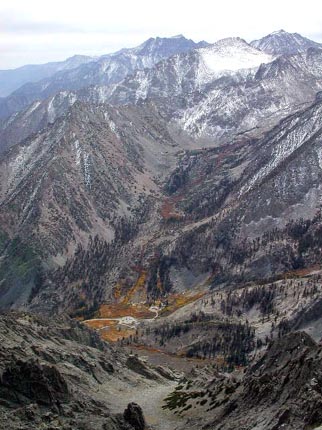 I motored Friday over Carson Pass, and enjoyed viewing the first of many fall colors. It is amazing how much difference 5 days makes. My hike the Sunday before saw little color, but now, the peak has quickly arrived.

The sky was a bit overcast, so I had to do with the lighting. The sun broke out weakly at times, and I chose to make the most of this.

I continued south along U.S. 395 to see the result from this year's terrible fires that swept the hills along this beautiful highway. Some new road work made this a more pleasant drive, and isolated, turned groves of aspen made appearances as I sped along. The Conway Summit area was spectacular, but better on the way home. I took CA 158, the June Lake Loop, to find even more colors.

The area about Hilton Creek was colorful, too, and mixed, here, with homes. Ribbons of gold reached far up into the mountains.

Descending into Bishop, CA, I munched a burger, and stopped to catch the news at the library. I wasn't able to access my e-mail, so assumed that with the fine forecast, all were coming. I had dessert in Independence, CA, then found a campsite at the nearby County campground. I viewed a nice sunset.

Getting up early Saturday morning, I motored up to Onion Valley Trailhead to find the group, and so many climbers I knew from years past. Some 37 people chose to take the easiest route, while several others would go via another trail and route. I started up at 7:25 a.m.

Hiking up an old mining trail from a side road down the hill about a mile or so, we made good time as far as gain. The trail isn't well known, with no signs. It is overgrown at many spots, and climbs steeply up scree at times. We always had a fine view down to the Owens Valley to the east, and the weather, a bit overcast, was pleasant and cool for hiking.

Soon, we were halfway up, then I expected from my experiences 16 years ago, that the trail would disappear. It continued, with some rock work, up to about 12,000' elevation. We came to snow on the ground. The fresh powder reminded me of how much I love backcountry skiing. The trail comes to the main east ridge, then crosses over the ridge and turns into some rocky scrambling.

Large boulders mixed with slippery snow and ice required careful climbing moves at a few points. I stayed a bit back to make sure the slower climbers were coming. Traversing along the class 2 slope, the quarter mile, or so, long ridge demanded lots of time. Some two-way radios had advised the other group had summitted. I heard the yells of our leaders, and group, as the two finished the list. Most of the group were gathered about for their magnificent moment.

I came to the summit area, then waited for the group to move a bit before I touched the highest rock at 1:01 p.m. I immediately went about snapping photos, with both my Coolpix and FM2. The view of so many peaks I had climbed was awesome with the dusting of snow. University Peak (13,632') loomed hugely to the south.

Other climbers finally came up for the standard photo session, with all present list finishers posing for a picture. So many climbers had brought cameras, it was like a small media event! I was able to snap a few photos, but I knew our time up here was limited.

There was little wind. I continued to snap pictures, and then I was able to shoot a couple movie clips of our two lucky climbers. Some began starting down, and I hoped no one would have a problem with the snow on rocks. We had a dog with us, whom I tried to assist with an easier route when it had some difficulty with a few boulders. The leaders brought up the rear, and I helped guide some slower climbers, then took off at a slow run as I reached the scree trail. It has been awhile since I have been at altitude, so I thought getting down fast might allay a coming headache. It did.

The hike down was nice, and I slowed to take it in. The group was all over the trail, but all were experienced mountaineers. Back to the upper dirt road parking circle at 5:25 p.m., the leaders were already there. They said to have taken a chute down, which must have been faster than the trail. I came back to my car, drank up, and we were all headed to our party site down in the Owens Valley.

The 50 or so of us convened at the BLM Goodale Creek campground, and the festivities were underway as I arrived. Plenty of champagne, wine, and chips were on the tables, and it was left to the few cooks to prepare our sumptuous dishes. Halibut chowder, chicken chili, salads, cookies, and more treats were some of the outstanding efforts to provide an enjoyable feast for all.

The sunset promised to be spectacular. I walked up to a small ridge and photographed the blessings of this superb weekend weather.

The culinary treats were consumed, and the customary speeches and thanks were given about a campfire. It is a testament to the organization of the Sierra Peaks Section, and the Angeles Chapter, that we can achieve such incredible goals in a safe and highly enjoyable fashion. Our two new list finishers helped so generously in that!

The decorated cake was cut and served, and conversations about the campfire circle lingered well into the night.

I attempted a night on the ground, backpacking style, hoping I would find a resurgence of sound sleeping and an increased confidence in my camping, versus motels. I dozed off, then woke up early to put on some EW bottoms.

The sunrise was O.K., then the others were up. A pancake breakfast was served, and the temps became warm enough to use my digital camera. I shook hands, said farewells, then began my trip home at about 9 a.m.

Headed north on U.S. 395, I took what more digital photos, with now a sunny day and blue skies, and bright, vivid colors. Many motorists were about. This is the best weekend to enjoy the mountain fall, and to try a last High Sierra peak for the season.

We hiked some 8 miles with 3,600' gain on the peak. I shot some 500 digital images, with maybe 75 frames of Kodachrome, mainly for back-up and printing. I was able to keep my cash expenses low, motoring some 700+ miles at probably 41 mpg.