Resolving to get more exercise, I motored off early this Thursday morning to Merced, CA. There, I boarded the YARTS bus to Yosemite Valley. The first run leaves at 7 a.m. The round trip fare was $20. A good load of people were picked up along the way, but several seats were still available. 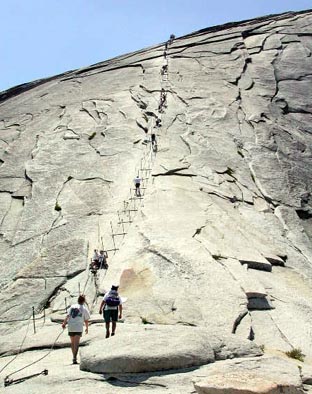 Reaching the Yosemite Park Visitor Center, I walked over to catch the free Valley shuttle. Debarking at stop 16, I began my hike by about 9:40 a.m. A wide trail leads to the old start across from Happy Isles, where the old bridge was washed out by a flood. I had fortunately chosen to take the north side of the Merced River, and came to the start of the John Muir Trail.

The sign reads "Half Dome 8.2 miles." I hiked up the partially asphalted trail, and soon came to the Vernal Fall View Bridge. I needed to use the restroom there, replete with flush toilets.

Hiking up through a pine and cedar forest, I took plenty of photos with my Coolpix. A pack train came by, followed by rangers on horses leading mules. I used the time, as they passed, on reloading a camera battery, and organizing my gear. When I take a photo, the time and date of image capture is recorded. That is almost better than notes on my times.

I came to the top of Nevada Falls after two hours. I rested a bit, and drank some of my three liters of water. I imagined I was doing well. I took pictures of the compost restroom, and followed the trail into Little Yosemite Valley. Some junctions are passed, all signed. The ridge to Half Dome didn't look too far. I kept track of my times, and began to slow down. It was warm, but a cool mountain breeze made things nicer.

The trail climbs through a burnt forest at one point, and some old snow plants were seen. A few deer made their appearances. I approached the main ridge, and thought I'd take a rest atop the last hill before the cables. Rock steps led up, and finally I was facing the steep-looking, final section to the top. 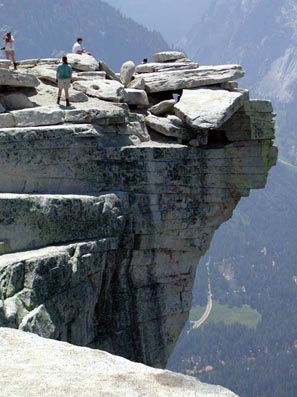 A large pile of old gloves lay at the base of the cables. I declined to use any, but that may have been a small mistake. I hauled myself up, and stepped up vigorously, at first. There is room for people to pass, and I later had to stop and rest quite a bit.

My mouth was getting dry. I dry-heaved once as I thought about my situation. Fearing to drop anything out of my pack, I did not take it off and get into it to take out a canteen. I even considered turning around! But soon, I came to the top of the cables, and it was so beautiful! The summit was a minute walk up to the right. I topped out at 2:23 p.m., some five hours from the bus stop.

I was mindful of the time. The last bus back to Merced leaves at about 8:15 p.m. I allowed five hours for the climb, and four hours back. I wanted some slack time in the Valley, so I stayed on top only some 22 minutes. Shooting photos and movies, I rested as I could, and noted very few were interested in touching the top. Many persons were over to the southwest, for the view down into the Valley, I'd presume.

I started down the cables, and slid down them expediently. I had feared my grip and arms would give out. If you slipped badly, a good chance of injury was possible. You have to hang on, almost constantly. Some hikers had sneakers, with poor traction. The rock is getting polished and slick from all the use. I'm amazed that there aren't more accidents!

Gratefully, I was down off the cables by 3 p.m. It was then down the long sets of rock stairs, then back to the dirt trail by 3:21 p.m. I was getting low on water. I made good time back to the Nevada Falls Bridge, rested, and finished my water. The rushing water here made for a good motion study shot with my Coolpix movie setting.

I knew now I had plenty of time, so walked steadily on. I drank a full liter of cold water from the faucet near the Vernal Falls Bridge. Back to the bus stop by 6:30 p.m., the Valley shuttle quickly came by. I walked about the Village, getting a soda, before waiting at the nearby YARTS bus stop.

The YARTS bus came by right on time, and we eventually pulled into Merced by 10:30 p.m. I had to pick up my backpacking stove, then motored quickly home.

Only a few mosquitoes bothered me at the bus stop, with none on the trail. There is no snow left except on the distant high peaks. Many people were packing in. Some work is due on the cables later in July. The route is to be closed for construction.