With my companion Bob, I motored at an early hour into the Northern Sierra, intent on exploring this fairly new trail built into the Carson Range. The highway traffic headed up U.S. 50 wasn't so bad this Saturday morning. There was high cloud cover, which made the photography poorer, and didn't bode well for the weather. We had made our plans, but evaluated our alternatives.

Stopping at the old Twin Bridges area, now a fee parking trailhead ($3) for the Pyramid Creek Trail, I had to use a tree since the single unlocked restroom was occupied. We motored on, since doing Pyramid Peak today didn't look too good for the summit views. If I am climbing 4,000' gain, I want a nice clear view, and great photography, with sun, blue skies, and puffy clouds! 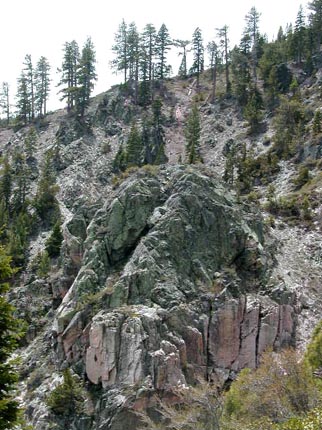 We detoured a bit to Minden, NV, for food and drink, and arrived at the Faye-Luther Trailhead by 9:41 a.m. Starting up the trail at 9:50 a.m., we took the main trail, which runs up to a brushy creek. The trail is nice, graded on sand, and runs up past pine trees, then firs, as it gains quickly in elevation. There are no signs indicating any mileage to any destination. This is a dead-end trail.

We soon gained a nice view back toward the Carson Valley. It was getting a bit warm, and we drank our water. My thought was to investigate whether this would be a good way to ascend Wade (9,367'), a rarely done listed peak on our Tahoe list, and also Job's Peak (10,633'). I had heard from several sources that this could be done, despite the starting elevation here of some 4,800'.

We climbed quickly up the trail. We came to a large cairn, after some 4 miles, which I later assumed to mark the end of the official trail. My old 15' topo showed an old trail or road continuing to the crest. We climbed higher, following a use trail and plenty of ducks, but saw nothing where my map showed the old trail to be. Slides and avalanches over some 50 years could easily have wiped it out.

A steep, gullied canyon with small waterfalls blocked our route to the presumed pass. I knew a dirt road/trail was there at the top, so we mulled over doing some steep, loose, class 2 type terrain to investigate further. It had taken some 3 hours to get to about 8,000' elevation. The crest pass, at 8,600' elevation, seemed a long, trailless traverse over there.

Since we had determined there was definitely no trail, to speak of, going anywhere further, we chose to turn around, at 1:26 p.m., and do other things.

Other hikers we met repeated that they also thought a trail ran to Job's Peak. Two hikers Bob spoke with earlier affirmed that. Not from here!

Back to the car at 3:52 p.m., I knew what I would do the rest of our day. We motored into Carson City, NV, for drink and food, then continued north on U.S. 395 to Reno, NV. Fortunately, the Patagonia Outlet was still open. The holiday weekend sale was on. I took some good deals on clothes I needed anyway, and we then hiked the nearby, short Tom Cooke Trail to the top of the nearby hill. The soft light of the evening prompted a few more photos.

Motoring west on Interstate 80, I was surprised at how much snow lingered on the peaks. No hiking there, without snow, for a month, I'd say! I motored quickly homeward, getting to our meeting place, and we parted ways.