Some thousands of miles worth of hikes that I usually don't mention on this website are undertaken by me, sometimes daily, on the American River Parkway. This is a great and superb resource, which has gotten even better by some recent trail work, and new mass transit opportunities enabling me to walk one way, and then return, by mostly electric power, to near the start point. 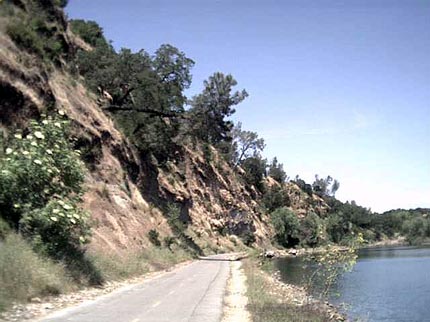 Saturday, May 4, I was able to break my old one day hike distance record by doing 30 miles. From my start on the bike trail in Old Sacramento, I proceeded along the path through Discovery Park, and then along the well built trail. With my new bargain basement Ixla digital camera, I have the means to undertake some photography, previously done rarely with my older film cameras.

There have been so many sights of nature to record. The fall colors, cottonwoods molting, flowers blooming, wildlife viewing (ducks, geese, seagulls, egrets, hawks, owls, wild turkeys, quail, vultures, magpies, and many other birds, along with salmon, trout, snakes, including rattlers, lizards, rabbits, chipmunks and squirrels, deer, and more) have been so fine.

I use the left shoulder, which is now basically completed through most of the length of the bike path. Some old sections of pavement and other side trails take the place of the shoulder in some areas. Hikers and joggers are directed to do such, to stay out of the way of faster users--cyclists and in-line skaters. Gladly, the larger, and quite backward, activities organization here seems to have curtailed their obstructing hikes, claiming fair use of the blacktop, despite their loud, official assertions to be wild-loving people!

I often walk 15 to 25 miles without much of a thought. It is an inexpensive activity, although with only maybe 200' gain at most, due to dips and bridges. Buses linking with the local light rail make for expedient rides back into town.

There are conveniences such as outhouses, picnic tables, and water faucets to assist in your enjoyment. I try to partake in some of the exercise stations (do I need to work on my chin-ups!) placed in two spots. Not real far off the Parkway, on some side streets, are fast food restaurants and other businesses. The neighborhoods are pleasant enough to walk through, although the main boulevard traffic is constantly heavy.

With a spell of cooler weather, I sought to surpass my old record of 29 miles, set in January, 2001, making it an even 30. This takes me out to Hazel Avenue, with a side trip counted, and back to Fair Oaks, CA, previously the furthest point east served by regular mass transit.

I keep up a pace of a bit better than 3 miles an hour, for many, many hours. I do donate to the Parkway maintenance through the many "iron rangers" situated at many points. Safety is one of my concerns, seeing how deranged people and outright criminals make it onto the rec areas.

On the 7th, I took the train and a bus to Fair Oaks, where I debarked, crossed the historic Old Fair Oaks Bridge, and subsequently headed east on the bike trail. One crosses back over the river on the pedestrian walkway along the Hazel Avenue Bridge, and signs point out the moderate distance to Negro Bar, a nice State Park where, in the Gold Rush Days, many African-Americans took up mining claims along the river.

Canyon Dudlyei graced the river bluffs, and many other users enjoyed the pleasant day. I initially was going to walk back to Fair Oaks after visiting the town of Folsom, CA. I walked about historic Sutter Street, with new art galleries that would rival the quality of others in so many trendy Western towns. A reasonably priced restaurant offered a tasty bowl of soup. I normally quench my thirst as economically as I can, using beverage bars and little mini-mart shops. I do not carry a canteen as tap water is available, and I so enjoy the cold taste of iced diet sodas.

Finding out about a new bus service, I walked out to Riley Street and Glenn Drive, in the thick of massive new development. The Folsom Stage Line commuter bus comes by about every hour, from 5 to 5, and I timed my arrival just right.

I had done some ten miles this day. The sights on my bus ride, back to the connecting Light Rail station, of the sprawling Intel grounds, the Folsom Auto Mall, and Aerojet were all new to me. This area is due to be served by an extension of the light rail line, and will offer the op to do a 35 mile hike, with then no transfers needed to get back into town. I can hardly wait!