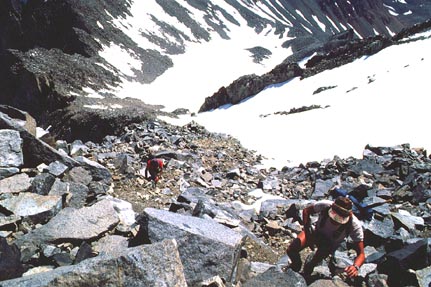 Staying over in South Lake Tahoe, we made the drive down U.S. 395 in the early morning. Unfortunately, this brought us to the Red Lake Trailhead, elevation 6,600 feet, at about noon. The radio said that it was 90 degrees in Bishop.

We slowly started up the trail. It is some 4,000 feet gain to base camp. We had to bear with the heat. An occasional breeze cooled us slightly. At least, I knew the correct way to go. I had found the correct trail on an aborted attempt to do this peak by another Sierra Club group, a few years ago then. The maps are wrong. The trail, which is passable, ascends up the north (right) side of the main canyon. While going up, one might be fooled by the sight of a distant trail which heads to the left (south). This tracks out to nothing, and then you must head cross-country to get back on route.

The true trail reaches the upper alpine canyon amidst a grove of trees. Red Lake is not too suitable for camping, since it is a rocky basin. Here, at a lower, small pond, we had wind shelter, and even wood for a small campfire.

Waking up early the next morning, we began our climb. The weather grew a bit shaky for us. It being overcast and grey, we made a start. Taking the spur ridge with some loose, but easy class three rock, we came to the main ridge just south of the low saddle between the two peaks. The route from here to Split Mountain summit is easy class one or two. It's a lot of work doing a 14'er from a starting elevation as low as this requires from the east. Finally, we topped out and enjoyed the snowy views. 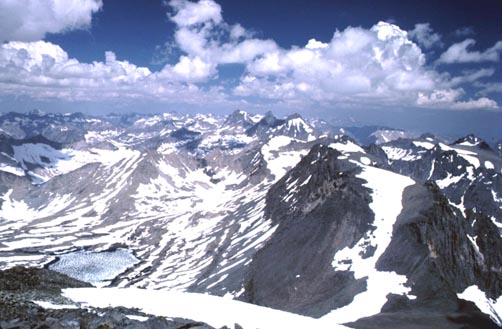 We had time for pictures. I thought it was beautiful! This peak ascent would qualify me for my SPS Emblem, being my tenth Emblem peak. I wasn't that excited, for that is normally an easily reached goal for most. Only a total of 25 peaks are needed, with qualifications. Hundreds have qualified. This was also my 59th or so listed SPS peak.

The weather looked well enough for a traverse over to Mt. Prater to the north. It doesn't look far on the map. As we descended to the saddle, the clouds began to move in and thicken. I didn't want to have to go back up this trail, so I really moved, leaving, normally, the fastest climber, behind.

He chugged on after me. My other friend said that he'd never seen me move so fast. I wanted to beat the approaching lightning storm. Bolts were striking to the south and west. There was an easy knife-edge, then, we gratefully didn't have to cross any big flat area to reach the top. These are a hard-won two peaks!

We headed back as soon as we were all on top and signed in the register. The rain held off until we were back down to Red Lake. Coming back to camp, we had our food, and with then, probably, a good night's sleep.

I was up early for the sunrise. All we had to do today was hike back to the cars, about 5 miles. That went well. We ran down the final sections of sandy slope getting back to the vehicle. Fortunately, we had a high clearance VW van to save several miles of extra walking, as opposed to having a regular passenger car. High clearance is very important on this approach.

This was probably one of my best High Sierra years. I was to do many more peaks, but I was pleased to be on my own, taking others. When you know your judgment and navigation are good, that is an immense confidence builder.