No one from the local chapter even called about this second scheduled lead of mine, joint with the Angeles Chapter Ski Mountaineers. I had written an article about last year's trip for the chapter newsletter, but I imagine that this amount of driving and skiing was now just too much for anyone. I drove down U.S. 395 by myself to join three others who had come from the L. A. basin. One of them worked for the French consulate, the other was his friend, and both were great skiers, with Randonee equipment. My co-leader, Owen, was wishing to make the summit this time.

The snow was lacking this year. We were able to drive to and park at the regular summer parking lot at South Lake. Getting a good start, we had to hike along the mostly dry and snow-free trail toward Treasure Lakes. We encountered another Club group bent on climbing to the top of Mt. Gilbert. They had stopped, and some were mulling things over. Climbing is tough on beginners. Jean-Francoise wanted to change plans and ski Mt. Gilbert with the group, although theirs was a climbing trip, with ice axes and crampons. Some attractive women provided an social opportunity, perhaps. 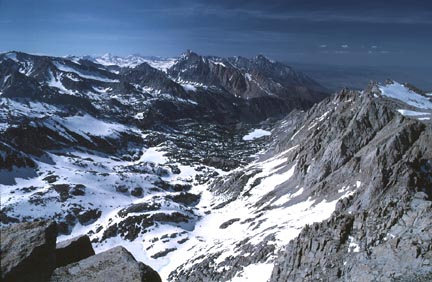 We went on our way, and found a dry base camp. Wishing to get it over with, we climbed cross-country with day packs, carrying skis, and traversed into the proper drainage for the peak's east slopes. We then put on our skis and climbing skins.

The two French skiers set a track for the top. The summit view seemed backlit from the north, and there wasn't much new to see. I took pictures to record conditions, and we shortly started to ski down and back. The snow was still too icy for me, and I used survival skiing technique. The two French skiers cut up the slopes, going as fast as at a regular resort. Will I ever ski like that? Probably not!

Owen had stayed below. He was too plagued with problems. We all made our S's on the snow bowls down to the snowline. We retraced our hike back to camp, and I have no recollection of much, besides sleeping.

The next day, we chose to hike southeast around the shoulder of Hurd Peak to the South Fork of the Bishop Creek drainage. Getting back on mediocre snow, we dropped backpacks and headed for Mt. Goode, at the head of the watershed. Jean-Francoise again had the will to ski to the top. I knew I wasn't in his league, so didn't want to slow him. A set of S's made by someone tracked down a steep part. Jean-Francoise made the summit, but he said it was steep!

As I skied back along the lakes chain, my ski binding came loose and detached. There was no repair that I could do. It was maybe four miles to the cars. I put my skis on my pack and started walking. The others were upset. They would have to wait. We all had to hike where there was no snow. The snow was firm enough for hiking, so I went along at good hiking speed. Soon, I was able to hike down to the South Lake shore, which had no snow, and hike along the bare shores back to the parking lot. I had plenty of time to make it. 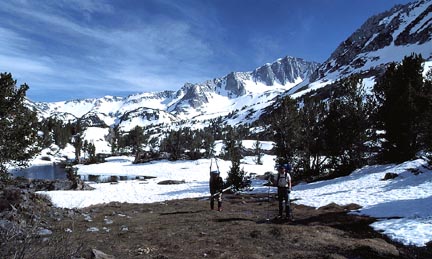 We regrouped at the parking lot, and the others posed for my picture. The light was nice, and I was mildly tired. Though then, I had nice views on my drive home.

These experiences moderate your ego. Instead of the repeated successes, one does suffer defeat. I had climbed a peak, but not a listed one, and had skiing, but not as great as before. I don't know if I'll ever climb or ski this peak again, at this point. We may have been really lucky to get the great conditions that we did, the year before. Many trips were canceled, or didn't make it to the top, in the years to come.

I wish for a one day tour to the top sometime, but there are no takers. I hope others have as much fun as we did. The reason I work for wilderness preservation is to protect the non-motorized recreational opportunities that we have set and enjoyed ourselves. I think that these are fulfilling and rewarding enough that such fun will be universal. To climb a mountain and ski down it, for me, is the finest spiritual activity that one could engage in.