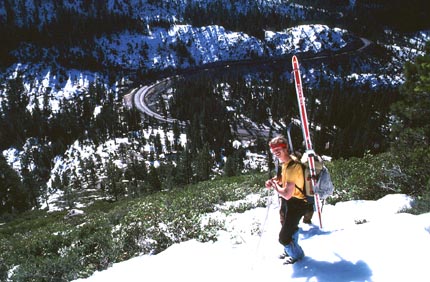 I received some two fine skiers on this particular, scheduled lead of my favorite local peak ski. One fellow reported being the lead cross-country instructor in Vail, CO.

It was a great day for this peak. The three of us made short work of the climb. One fellow had skinny skins for grip. I used red wax, still, at this point. I have since gone over to skins.

We had to bushwhack the first several hundred feet up from the old Twin Bridges store. The Vail guy asked if this was a hike or a ski.

We reached the snowline below the canyon rim, thankfully, and chugged on up the south ridge. I knew that it was going to be a great ski down, with classic spring conditions.

It was cold and windy on top. The view was clear, and we wore our parkas. The others didn't think that it would have been so easy. The total gain is 4,000 feet, over three miles. Those statistics are highly intimidating compared to other scheduled ski tours, most of them being less than 2,000 feet gain. We had a group summit shot, and then began the ski down. The Vail guy was good. He must practice on lift-served slopes. We came to the steep section and we all cranked turns. The Vail guy reclimbed some slopes to do some more.

We were down in no time. As we arrived to the car, by about 4 p.m., the Vail guy's friends pulled in. What timing, for him! At least this was no problem tour, with people that couldn't ski. This may have been the best time I've had skiing this peak.

Once, one fellow from the local Singles Section lied about his ability. He almost killed himself. He certainly received a minor injury. Couldn't ski worth a darn, even. "No problem," he stated over the phone about my query about his ability. On another tour, one person went berserk on the descent. He tried to ski into a potentially hazardous avalanche area for no good reason. Not even a good skier, he could only do kick-turns. Him shouting some nonsense, I had to try to physically stop him, so came up after him to grab him. No matter what you say, some participants will do exactly as they please! It's not good, local Club chapter form to ban or blacklist people, by the Execs. Maybe because I had taken his ex-wife up the year before, it must have irked him.

Having skied this peak eight times, I feel I have mastered the conditions, ranging from rime ice at the top, to breakable crust for 2,000 vertical feet. It is a good local choice for practice. The ample gain allows for much conditioning.

But of all the persons that I have skied this with, none of them have repeated this tour with me. I view this as a pleasure, while others see it as a one-time challenge. I guess that makes a mark of a determined ski mountaineer, or probably, in most others' eyes, someone who is stir crazy!