A disappointing, one single climber, but sensible friend, was the only taker for this scheduled, difficult, fourteen thousand foot peak in the Palisades near Big Pine, CA. Many other of my partners had jumped ship and gone with another trip, in another year. I seemed to be jinxed with three successive, failed peak attempts, mainly due to weather, in the Palisades within a few years. 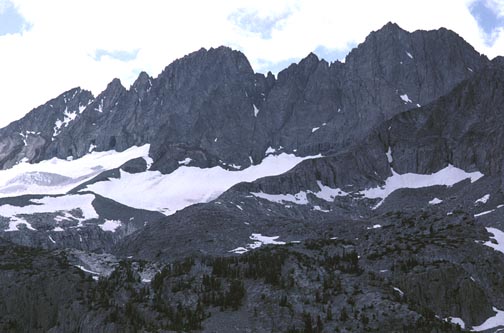 However, an ascent on this particular peak is best done with only a few climbers, due to the high potential for rockfall. The earlier guidebook was supposedly wrong on the eastern approach route description, but we were so fortunate to see another climber correctly doing the easy class 3 route up the main chute. It might have taken longer without seeing this lone climber, but I had kept visual checks on the chute that seemed to head for the perceived highpoint.

Leaving town Friday after work, it appeared that the weather was going to be good. The Mountain Mahogany were shedding at the trailhead for South Fork, Big Pine Creek Trail. It's a big bonus to witness nature in its acts of transformation and change.

We hiked up the trail to Brainard Lake. Exploring, I then found a use trail to Finger Lake, the highest lake to camp before the climb. The deep blue pools there allowed for great pictures.

I carried only a nylon tarp, and strung it up with a nylon guy cord between small trees. Somewhat fatalistic, I retreated into my sleeping bag under the tarp, as afternoon rain and hail pelted down. The precip didn't last long. The skies cleared in preparation for a cool night, and hopefully a good tomorrow.

Getting up early, which was more of a chore in the cooler weather, now in mid-September, we hiked around the lake and climbed the steep snow chute at its end. Climbing further, we reached the glacial moraine. I saw the climb. One can lose track of which chute leads to the summit. I took lots of photos, since many climbers get lost or onto the wrong route as they climb. That could cost the peak, or even a life, if they are poor climbers.

As we climbed the glacier, I had to decide where to head. The guide was helpful to a point, then the misdirections would presumably take over. I spotted a lone figure going up just ahead of us. Wow! He located, for me, the critical ledge that one ascends, after a steep section on the glacier. This ledge is crucial to getting into the correct chute. Leading was never so easy!

The rocky, blocky ledge traverses right (northwest) into a rock chute that drops off below. A class 3 section above, with few holds, is climbed, then the terrain gets easier from there. Mostly what I'd call class 2 scrambling brings one up at a modest angle, far less steep than one would imagine looking at this chute from afar. The initial perspective is terrifying. Most climbers would never believe that this chute to the top is really so easy.

We started up, in a direct manner. The Guide says to go right at a junction, but stick straight up to the least angled chute. A rock promontory is a good marker, and one keeps this below to the close right (south), looking down. It is simple scrambling to ascend the several hundred feet of ledges and loose rocks.

The main problem is not to kick rocks, or otherwise send them crashing down below. The rocks will bounce and go a long way. A skilled climber won't set even one loose, while a novice will repeatedly endanger everyone below. The custom is to yell, "Rock!" if one is set loose. That warns climbers below in a universal "heads-up." You do this without fail. Many beginner climbers may think that it's funny, but then they haven't had one crash into them without warning. I wore a hard hat, which is virtually essential on a climb like this.

We did well, being careful, and knocking maybe only a few smaller rocks down. As we approached the main crest, the angle of the chute became steeper. The guide correctly says to go on ledges to the left (southeast), which we did, about a hundred feet below the ridge top. You must guess correctly at the route up from here. A sloping slab above a big drop-off leads to the broken rock above, and the register. 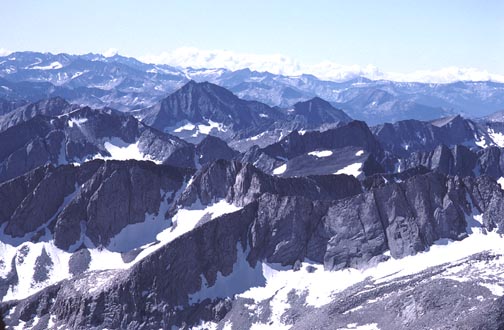 The view was anti-climatic, for me. I had seen so many of these views lately. It was hard to imagine that persons traverse along the top of this ridge.

I had plenty of time to look through the register. These are so helpful in a determination of the correct highpoint. It was possible that a rock to the south could be higher, but the register placement would be grossly incorrect. The difference in inches would not be much. The crest ridge was too airy-looking to give it a scouting. I shot the usual 360 degree panoramas. The sun was bright on the glacier to the east.

Then, our business and rest were done. We came back to the angled slab, and the other climber wanted a rope. He had carried it up from base camp, since I carried it partway from the cars. I was glad for the practice. I didn't need it, myself, and next time, I won't bring one. The shadows and light made it impractical to take pictures of these moves. I try to record the route, with the crux moves especially, but really, I would be endlessly taking pictures of rocks, and forgetting what they were. A video camera with sound and wide-angle lens would be nicer.

The climber that led us up this chute had long descended as we climbed up. He was incredibly balanced and proficient, leaping down from rock to rock. We went far more slowly, with hands on holds. I tried to remember our exact route down. It's very gratifying, and good for your survival, to guide to and find the same, exact rocks and moves remembered on the climb up. Sometimes I leave ducks, which is the term for rocks piled on top of each other in a fashion that is clearly a construction. There were no ducks or cairns on this entire route.

We came to the base of the chute and took the ledge back to our ice axes and crampons. We left them at the point where the ledge comes back to the glacier. I think I just slid down here, since the afternoon snow would be softer.

Since it was still early in the afternoon, we chose to pack out and drive partway home. I try to better times set by other groups, and also, to have a regular cooked meal, in a restaurant, than expensive, freeze-dried, camp cooking. These prepared campmeals are so filled with preservatives, anyway, it's sometimes cheaper and healthier to have a freshly made cheeseburger and fries, with plenty of drink, salad, and soup. I love to support the friendly businesses along my favorite highway.

We came back to the parking lot by dusk, then drove north to camp along the Walker River. It rained that night, but we used tarps or slept inside the car.

It was a ten year wait for me to finally climb this peak. I had wondered about a solo attempt way back then, but was discouraged. The mountain will always be there, as they say. But the problem is, maybe you won't be!