Rich, my then steady DPS carpool companion, needed these Arizona peaks for his own list completion. So, we arranged to meet another DPS climber, Brian, outside of Phoenix.

After a quick, desert, car camp along I-10, I took many telephotos of the peaks and ranges as we drove east. Driving through the Phoenix area, I suggested a visit to the Lost Dutchman State Park, where a scenic view with hiking trails and plenty of flowers used a lot of my film. We found a campsite at a nearby reservoir, and then motored back, the next morning, into Apache Junction, AZ, for breakfast.

Our other member of our climbing party cursed our bad directions, and had to then think to find us. He found us, relieved. We caravanned to the Kings Ranch Road trailhead into the Superstition Mountains for our climb of its highpoint. A nice trail with lots of blooming cacti leads to a pool with plenty of rock art.

The cross-country hiking begins here. A steep, rough slope leads to a balanced rock that marks a part of the route. We picked up a use trail and followed ducks and spray painted arrows along to the top. We lost a brief moment to find the easiest way to the top, where we ran into two other hikers. One reassured us about Weavers Needle, stating it was easy. I knew two climbers from the local chapter had failed to do this next peak.

The view from the top of Superstition Mountain took in the eastern suburbs of Phoenix, with smog obscuring the downtown area high rises. The Needle, to the east, looked steep. We had our lunch, and I had a soda or other drink.

This first route is easy to follow once you know it, and we came back to the Hieroglyphic Canyon rock art site to cool off. The 2 mile trail back made for an easy end to our first peak climb of this trip. 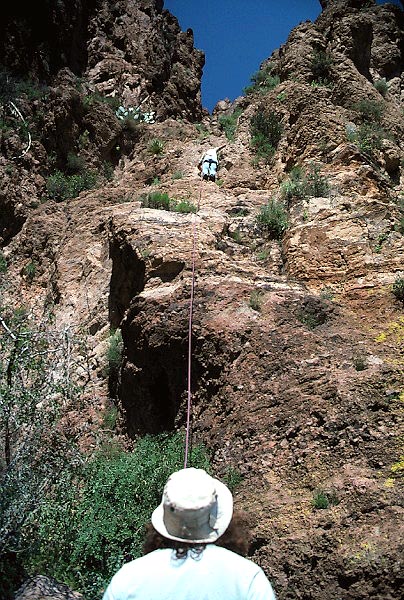 Motoring about to the next trailhead, we made a car camp nearby for an early start. Not only is there a class 4 rock climb, but a 10 mile round trip hike!

As the sun rose, we were on the trail. This was everything I imagined about Arizona. Saguaro cacti and plenty of yucca, with pinnacles and rock formations everywhere, made for a great photo hike.

The trail runs to within a mile or so of the Needle, and we thrashed cross-country to the base of the climb. We rested, and looked it over. Rich was a very good rock climber in his prime, and after some appraisal, led off with a rope.

The rock is not real good. The holds are small, and rock does break off here. It is an unprotectable, 40 foot section to the ledge and solid anchor above. Rich took his time. Brian belayed steadily, although in a event of a fall, the rope would do no good.

Rich reached the anchor, and tied-in. Success! Brian followed, and it was my mind to wait below and skip this peak. Brian convinced me otherwise, and I tied-in and took this climb, however safely now, with an upper belay. It was easy, if you don't have to worry about falling.

We climbed up to another ledge, where a big lizard sunned itself. A short move up a crack led to more scrambling, and then to the notch between the two points of the Needle.

A 10 foot high, awkward, dicey move is required to pass onto easier ground. A use trail with ducks leads to another steeper section. We used a rope again, although the holds here are very big and plentiful. The guide was good in its description, although I have a fair photo record now.

We all topped out together, extremely pleased that we did it. Superstition Mountain rises higher to the west, and another higher peak was seen far to the north. I wondered about the lower needle, and surmised that it, too, required some rock climbing. I would never try to lead this peak, unless it was of some real importance. My climbing skills are just too weak now. My hands were cramping from all the holds, and the heat caused my perspiration to run down my glasses, having to wipe them repeatedly.

I took plenty of photos, having been able to carry up my camera. I neglected to carry cans for a register container, so I left a book in a plastic, heavy duty baggie, weighted down by rocks. Other, later, DPS parties never reported this placement. Brian again sliced his fresh tomatoes for his summit, ham sub.

We used the rope for sections on our downclimb. Getting down to the top of the 40 foot section, we had to dodge as a "rock" warning was shouted. I did the first rappel, something that is very useful in climbing, and then took pictures of the others sliding down the rope. 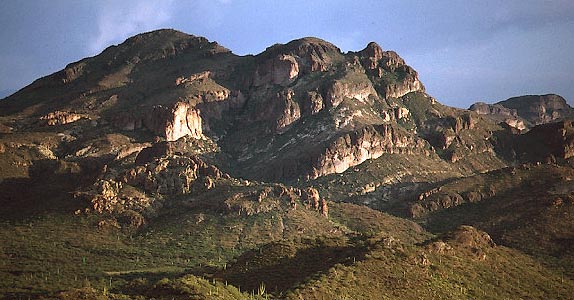 Finding a better use trail back to the main trail, we took off back to the cars. I took more photos, but we had to rush. I had to save some film despite the gorgeous scenery. A handgun had been placed on a rock along the trail, at one point, and I wondered who did that. I strolled back, pleased with our safe success, and we returned before dark.

We had to drive about 170 miles in the night to the next peak, so had a quick, late dinner in Tucson. We came to a campspot next to an abandoned home right near the trailhead on the Papago Reservation.

Baboquivari Peak is over a 4,000' gain hike with a class 4 section, where once a ladder had been bolted. The climb is a long day. Mostly, a good trail is followed to the class 4 section.

We began piecemeal up the lookout trail. I went ahead to stop here and there for pictures. The two others caught up, and led up the class 3 slabs toward the top. I have problems with friction moves, but I did this alright.

Soon, we came to the base of the class 4 section. I thought I could lead this, but I let Rich go first. There are three bolts for use as protection, which Rich used gratefully. This was a bit easier than Weavers Needle. A oak tree at the top of this pitch makes a good anchor and belay stance, and Rich belayed the two of us up. I snapped a photo of the view downward while most of the way up on the climb. There are several small ledges to stop and rest upon. Brian had more of a problem than myself, connecting these ledge-to-ledge moves.

There is one more, unexposed, bouldering move past a chockstone, then more use trail leads to the wide, flat summit. I had brought up my camera, again, for the group shot. The view is of mostly flat, surrounding, desert plains, with Kitt Peak, with its observatory, to the north.

These climbs weren't so bad! They are good to get over with early if you're going for a list completion. Some novice peak climbers fret and even get hysterical about having to do these. A good climber will scoff, knowing what basically non-climber, hiker-types have completed the list. While peak climbing can include some moderate rock climbing, it is not a real laudable mountaineering accomplishment. The climbing is generally easy and short. A real challenge would be the east side (5.6) of this mountain, which seems to attract climbers from a long way away.

We had lots of time to start back, and we rappelled down the class 4 section. A novice peak climber had fallen to his death recently here, failing to use safe rope technique. It doesn't hurt to know really how to use ropes, and having them along. A point of danger may be climbers wanting a peak so badly that they will agree to follow unsafe leaders, relying on unmerited trust and faith. So much for them, but the retrieval or rescue people risk their lives to make an extraction. That's unconscionable for any petty purposes, or ill-advised adventures, on whatever, must-have peaks.

I took more pictures of the beautiful area on my hike back. I had now certainly seen my share of saguaros. On the drive out, we stopped for a photo of the peak in the sunset.

Brian left to drive home to Los Angeles, while we two planned to do one more Arizona peak. However, it was forecast to be too warm, and I urged an abort on this. Our drive home completed about a 2,000 mile round trip. This was my best, recent, climbing experience, oft quoted on subsequent resumes.

The trick to doing all these peaks on one trip is to pick the right time of the year. It can't be too hot for the lower peaks, yet the snow and ice have to melt up at the top of this higher mountain. One needs the longer days, too.

We were also lucky to have no other parties climbing these class 4 routes. Rockfall is a hazard, and to have irresponsible climbers ahead and above you is good cause for doing the climb another day.