Since no great vehicle was needed for the drives to these climbs scheduled for this weekend, I took Rich in my highly fuel-efficient subcompact to save some energy, avoid some pollution, and avert some global warming. I was worried about the weather, which was very blustery as we reached the desert. 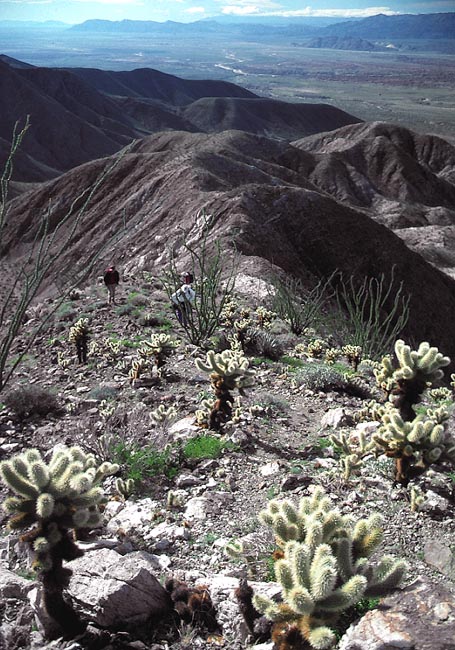 We met at an early hour at the road summit along Highway S22, the Salton Seaway. I found a desert lily as I hiked along through the open desert.

The climb leads up a ridge, and we moved quickly, with almost 5,000' gain for this single day. Cholla and ocotillo graced our intermittent use trail along the top of a ridge. The DPS route goes down and then up again. We try to connect ridges, but the terrain doesn't always permit this.

After climbing up in the cooler, windy morning, we topped out after five hours, and had lunch on the flat summit. I walked over to snap some photos of this view of the Salton Sea to the east and more.

We reversed our direction to take the same route back down, and came to the cars with plenty of daylight remaining. I think we had a nice sunset.

Our group headed into Borrego Springs to spend time. We played billiards, and I had soda while the others had beers. At about 11 p.m., we motored over to a car camp outside of town, where I had a sleep in my reclined car seat, with my passenger on the ground.

The next morning, at the Anza-Borrego State Park visitor center, a rainbow appeared. It was drizzling slightly. We were faced with low clouds, and chose to have a nice breakfast in a cafe back at the town shopping plaza. Our planned peak, Indianhead, was cloaked in clouds. We had to make a decision. I knew it can rain heavily in the desert, so, also already having climbed this peak, took the climb cancellation without much regret.

We toured the visitor center, and I took pictures of the dripping blooms in the nature area. My rider didn't wish to stay for anything else, so I promptly motored north. We arrived home that same day. I had driven about a thousand miles for this, then, one peak!