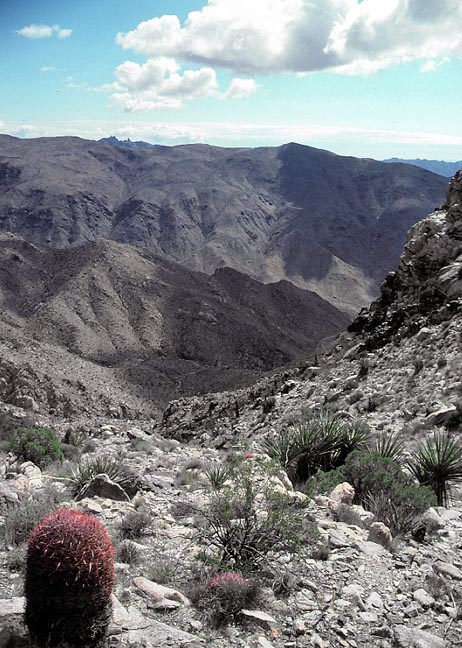 Being my third carpool with it, we needed the Jeep for only a five mile, each way, drive to the roadhead for this first peak. On the Friday afternoon drive into the desert, I saw thunderheads building up where we were headed. I suggested a cheap motel room, but the driver was firm to go to the recommended Friday night campsite. We soon came to the location of the storm. It poured! Lightning struck close by frequently. An associate back home, watching the Doppler radar on TV, knew we were really getting it!

The rain subsided a bit, but due to a complaint by the vehicle owner about me taking too much stuff, I had left out my tent. He simply slept in his truck, while normally I would have slept out of doors on the ground. I had to unload my gear out of the truck. I put it under my plastic tarp. Sitting in the front seat, for awhile, I hoped that the others would come by. Then, not very sleepy, I stood outside in my poncho, waiting for the dawn.

At about 2 a.m., the other vehicles of the group came by. Gratefully, I was loaned a tent. This gave me a few hours sleep.

The morning dawned cloudy, but the rain had stopped. I was still apprehensive about the weather, but the leaders assured me that it didn't rain often here. We motored over to the 4WD parking spot for this longer hike to the highpoint of the Old Woman Mountains. The range gets this name from a rock that looks like an old woman. It is a few miles from the summit, but visible as a small feature.

We made a hiking loop to do this peak. It took a few hours to the top, and the view was nice. I was to return here in a few years to attend another List Finish. One never knows what fate has in store, regarding these peaks!

Going down a different way, doing a loop makes for more terrain to be seen and explored.

We motored out and traveled over to another campsite for another great DPS feast and campfire. Plenty of food is prepared and brought for a potluck style meal. You don't have to eat out of cans or anything like that. With ice chests, fresh food and cold drink are our meal tickets, better and cheaper than any or most restaurants.

Due to deep mud, we were unable to drive more directly to the second peak, Sheephole Mountain. We had to backtrack through Amboy, after losing some time, then came to the parking, easily reached from a paved desert highway.

This climb was all over large boulders, some as big as a house. Navigation is best left to the experienced. One must have good balance and sure-footedness to hop from rock to rock. After some two thousand feet of this, we came to the short, low class three, summit rock. No one had any problem. Even the pet Pomeranian could scamper up. We had our lunch and enjoyed the views. 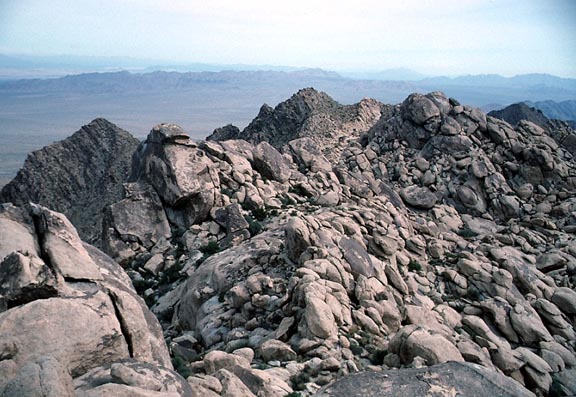 Our descent was routine, and we came back to the cars by late afternoon. Again, we said our goodbyes to the group headed back for the megatropolis southward, and we had our long drive north.