Realizing well that sometimes the sign-ups from the local area weren't enough to lead a good group, I elected to do a joint trip with the Angeles Chapter DPS/HPS. Phoning the leader, he agreed to take us after I assured him there wouldn't be a lot of people.

I left early, after work Wednesday, on the upcoming holiday weekend. I came to Joshua Tree National Monument (now National Park) on the morning of Thanksgiving Day. They were in regular operation. I toured the highways, taking photos of the rocks, with an eye for the climbing. This park is the premier rock climbing destination for Southern California. I didn't see many climbers today. I enjoyed seeing the points of interest, not realizing that later, in February, 1992, I would climb all of the eight listed HPS peaks here.

A productive stop at the Cholla Gardens produced good pictures, with backlighting. I viewed a hazy scene from Keys View, and then motored over south on Highway 86 to meet the group Friday morning. Thanks to a restaurant along the Salton Sea, I enjoyed a traditional turkey dinner.

Our joint chapters group met early at the road summit along S22, the Borrego Salton Seaway. A small parking lot must have been built special for our route to the top of the Santa Rosa Mountains. Four other persons had driven down from the north to join the seven or eight from Southern California.

I had no idea how to conduct the navigation, so the leader started out across the open desert, vaguely toward the ridge. I acted as sweep. He had to be slightly corrected by one of our group, who said he had hiked up nearly to the top of the first peak the day before.

Yes, as we climbed up on the correct ridge, there was indeed, a use trail. This was excellent! Our backpacking would be greatly expedited. With everyone carrying six quarts to two gallons of water, and with almost 5,000 feet vertical gain for the day, a footpath was really helpful. 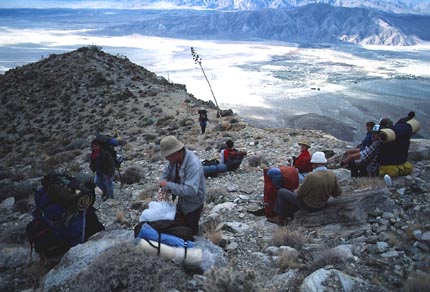 We made excellent time climbing up along the ridge. The clouds made for many dramatic scenes. I was proud of how well my group from the north did. No complaints, and all kept right up. Soon, the views began to appear. We had many rests, and the cooler temperatures made climbing very nice.

As we approached the top of the ridge, the weather began to set in. Wind, then clouds swept the site of our desert camp. Everyone set up tents, and then there was a problem with a slower group of hikers. The leader had to go look for them, as our camp was a bit down off the ridge top, obscured perhaps, in some trees and brush. Fortunately, he found them, and we all settled in for a stormy night.

I had dinner. When you carry all your tap water, it saves having to normally boil to treat the stream water or other local water source. This is a major task for me, since I don't use a filter or chemicals.

We socialized and visited about. It was a long night. The moon came out, and the lights of some town well below us made for a photography experiment for me. Only the longer time exposures produced much of a picture. I used a mini-pod and a tree branch as a camera support.

The next day, the sky had cleared. It was a big "go" for the peaks. We quickly ascended Villager Peak, which was a short way from our camp. It was now six miles each way, of up-and-down ridge running, to get to Rabbit Peak. Rabbit is a DPS Emblem peak, so gains real importance as a goal. The assistant leader didn't feel well, so, since I am a I-rated Angeles Chapter leader, I took up the rear.

We hiked steadily on, with the main group being quite speedy. I had to wait for a slower climber, who badly "needed" this peak. I shouted to the leader to wait, but he sped on. I had never been here before, but made correct guesses as to which way they had hiked. I worried, as they disappeared, that they wouldn't wait for the tail end of the group. Then I wouldn't see which way they went.

It was a big relief to finally top out, with the slow hiker making the summit plateau correctly. The weather was glorious! But, time was of the essence, since we had to return to camp, then pack the six miles out. Nightfall came at about 5 p.m.

The clouds lingered about the views, making for some desert drama. Snow was plastered onto some of the trees. I took summit photos of anyone who wished a free print for themselves. This makes a record of some who I had climbed with on this trip.

The hike back wasn't so bad, since it was more downhill. The slow hiker kept up, and I knew about which way to go.

Returning to camp by about 1:30 p.m., we hastened to pack up and prepare for our departure. The couple in my group had an apparent argument, delaying their time to pack up. Their tent had to be taken down by two persons. I watched as one of them sat on a rock away from the other to cool off. That alone took a precious fifteen minutes. 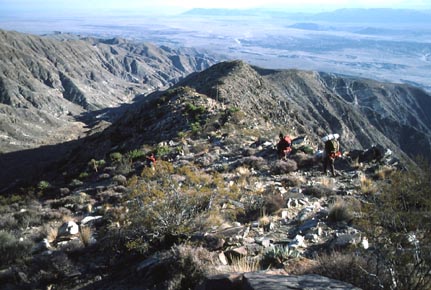 I was ready to go, so started down with a lead group. I presumed that the couple would settle down and pack up their gear. It was to take them another hour for that.

I kept up with two of the lead group, then arrived at the vehicles after navigating in the dark. A light comes in absolutely necessary in the otherwise pitch black night. We waited a bit, then decided that it would be a long time before the rest of the group came out. Some of us left for dinner in nearby Salton City.

Upon our return, the rest of the group arrived at 9:30 p.m. Without landmarks, it is difficult to see your way correctly. They said that the leader saw lights, so headed for them. That was incorrect. We left our car headlamps on to guide them, but that worked only when they got close. But, it was a relief that all got out safely. The northern group began their drive home.

I stayed over with the group to climb Indianhead the next morning. Again, after the assistant leader hurt himself jumping down from a rock, I took over as assistant. We hiked up a trail along beautiful Borrego Palm Canyon. The leader took us up where he thought the route was. I looked at the map, and suggested a correction.

This peak is said to have the most agave per square foot than anywhere else. You had to be careful not to run into any needles or spears. Cholla are especially painful.

Three of us made the top in a few hours. The high overcast made soft light. Two other hikers were also on top. I shot lots of photos. We had food, and I looked through the register. Then, it was time to leave. 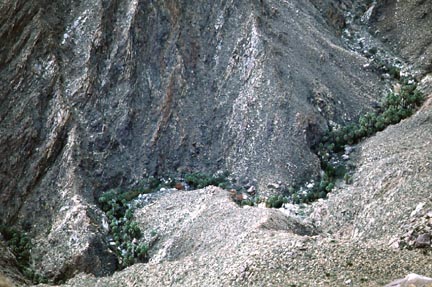 A dizzying view straight down into the palm tree-lined canyon made a nice photo. I planned to do this climb again in 1995 and 2000. But, rainy weather dictated an abort on one trip. An inclement forecast advised a cancellation on the other trip.

We came back to the parking lot at about 4 p.m. Not as long a day as yesterday's hiking, it is a respectable climb.

Many hot springs are clothing optional, so I don't take pictures, at least of people with private parts visible.

The local chapter was big on mass nudity, especially on hot days in cool lakes and rivers. Some people would click away. Other chapters don't allow nudity, so one should check or ask before planning shucking garments.

I camped alone somewhere after leaving the group. I remember having a nice Chinese dinner at a local restaurant near Borrego Springs.

The next day, I drove through Ramona to Oceanside, then north on Interstate 5. Rain was heavy at times. I endured traffic jams, then came to Los Angeles. What a town!

I visited briefly with family, then took a nighttime auto tour of the neon along various streets. I shot these night photos with Ektachrome 400. Those mostly didn't come out real well. I enjoyed seeing the many billboards advertising new movies along Sunset Boulevard. I was to come back here a couple times. I considered this one of my best Thanksgiving weekends. It was so great to travel. The freedoms we all enjoy now, though, are so taken for granted by so many people!