This extended holiday weekend began somewhat awry. Our wilderness permit wasn't available for pick-up the night before the trip. I had thought I asked a participant, when he phoned for his own additional permit to join our group, to tell the USFS to leave ours out in the pick-up box.

I had told everyone that it was real important for the group to get aboard the first ferry across Florence Lake on our day of arrival. Instead, I had to wait in line at the ranger station, some 40 miles away in Shaver Lake, CA. They opened at 8 a.m. for me to get my reservation fulfilled. Thus, the rest of the group was leaderless, but gratefully, one carload went by my alternate plan.

My carpool load came to the ferry for the second crossing at 10:30 a.m., so I could only hope the others would have figured what the delay was. We paid the fare, debarked at the other end at 11 a.m., and began backpacking up the trail. The three of us made good time, and reached the bridge and junction, by about 5 p.m., at about the fork of Goddard Canyon with the Muir Trail. There, three of the group were waiting. 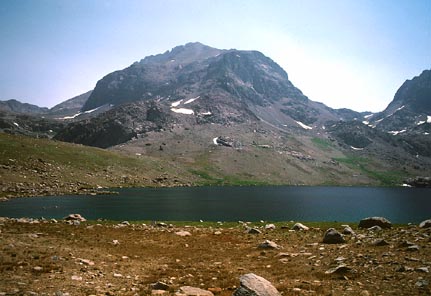 We proceeded a slight bit further up Goddard Canyon to establish camp. We wondered where the other group of three was. They had all been aboard the same ferry (capacity 25), but didn't know each other, or even think to ask!

The next day, we began hiking early in the morning for our main goal, Mt. Goddard. This was my second attempt, and it was crucial for me in my SPS Senior Emblem quest. The wild beauty of Goddard Canyon partly eluded my camera, since the trail and vicinity were in deep shadow. There were waterfalls, a mini gorge, and more falls on the canyon walls.

We hiked rapidly, since I figured we had about a twenty-five mile day ahead of us. We came to Martha Lake, with hazy weather. There was a huge fire going near Ojai, CA, along the coast, and the smoke carried all the way into the Sierra and the Great Basin. I had a concern about heavily breathing the air, as we are doing a highly aerobic activity. But, I hailed from a State office, having five or more smokers to contend with, every work day.

One of the group was concerned about having enough "go" to return after doing the peak. We left her here to read and relax. About then, we encountered the rest of our missing group. They had decided to backpack all the way to Martha Lake, so were a bit tired to try for the summit. Five of us were energized, so headed up over talus to the class 2, east slopes of the peak. Two of the other group were too slow, so they turned back.

Our group practically ran for the top. We were mostly accomplished peak climbers, so knew well the altitude. I came up in the middle of the group, with some so eager to make the top.

The view was somewhat grey and hazy. It has been written that 13 of the 15 SPS Emblem peaks can be seen from here. Our visibility was limited. I took pictures anyway, and was pleased with our group summit shot. When I returned home, I had it developed.

We all scrambled over to the secondary west summit, where we found a business card of an assistant editor for Outside Magazine. Also, it was hard to imagine that an associate of mine skis to this peak in winter!

We descended back to Martha Lake, and picked up our waiting hiker. The weather looked iffy, so we hurried as daylight was waning, too. Again, the hike along Goddard Canyon was in deep shadow, so I again couldn't get great photos. Racing the sun, we lost. I had to break out my headlamp, and tried to make sure we didn't miss our campsite. After checking slowly but surely, we came onto our tents by about 9:20 p.m. 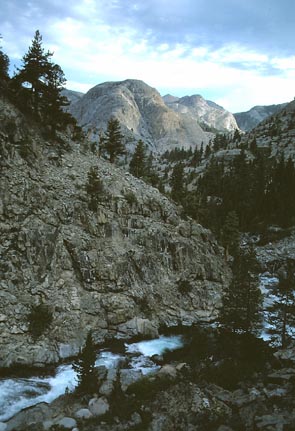 I had a plastic wrapped sausage (yes, I unwrapped it before I ate it), and a few energy bars, then dozed off.

Our third day, we shifted camp a bit, then dropped packs to climb Mt. Henry from the east. A steep, brushy canyon wall had to be climbed. It was full of flowers, and I tried not to step on them. Soon, we were up to a high rock basin, and the peak loomed above. The weather now began to worsen, and we raced the dark clouds, and then, faraway lightning. I took pictures. We signed in and didn't tarry long. Once down off the peak and back into the basin, we relaxed as the sun broke up the clouds.

Back to camp the same way, we were joined there by the other group of three. They had taken a cross-country loop backpack, this day. We told our stories, and feasted grandly, as we were sure to pack out tomorrow. Any extra food could be confidently consumed.

Our last day, we awoke early. I began hiking at 6 a.m. I wished to reach the ferry before the rest of the exiting weekend crowds. Setting a fast pace, we stopped hourly to rest, and to re-apply insect repellent and sunscreen. I began to tire, and looked forward to each stop. After ten or so miles of this, we finally came to the ferry dock just as the boat arrived at 11 a.m. I was the last to board, filling the boat.

On the other end, we formed a human conveyor belt to unload the packs from the boat. Recording some views on the road out, I was home by early evening to drop a passenger off at his home. Some of the others went to the Mono Hot Springs on their way home.

I was fond of recalling that my carload and I hiked fifty miles with 10,000 feet gain in exactly three days (a 72 hour period). This gets translated, by me, to "doing more on a weekend than most strenuous Club trips do in a week!" I have this problem, by some people. Such physical achievement is readily disparaged by some, glib of tongue. I have read where Mt. Goddard is climbed in a two day Angeles Chapter trip. "Big fish eat little fish," is the way this sport reads!