There was some confusion at the meeting place. My assistant leader, Rex, was running about like a chicken without a head. I felt later that he may have been deliberately behaving that way to ensure I wouldn't ask him to co-lead a trip again! We had done this peak together the year before, which is the reason why I asked him to do it again, as a Sierra Club leader.

Several persons appeared for this local Tahoe hike. He was preparing to leave with a carpool when I interceded to inform him of the secondary meeting place. "North Tahoe 'Y'," I said. "A supermarket is there, probably a Safeway."

Upon our arrival there, we found it was a Lucky's. We waited. Finally, I gave up and left for the trailhead. Our abbreviated group began hiking, and shortly, in about two hours, made the top. 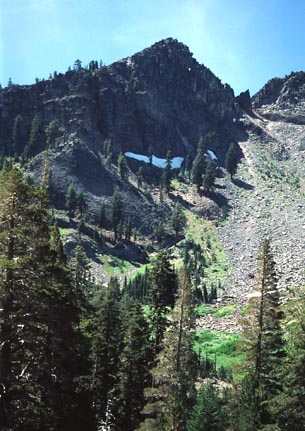 What would we see while having lunch but the rest of the group speeding up, an hour behind us. For some reason, they only heard, "Safeway," so motored two miles out of the way, by them, to that part of Tahoe City. They claimed never hearing, "North Tahoe 'Y'." The "Y" has been used as a standard, secondary meeting place for the local chapter many times. But, they didn't think to go to the "Y," as we didn't cruise about Tahoe City looking for them.

They realized, perhaps, maybe they had erred, and started their hike under Rex's leadership. Rex's memory was poor, and they had gone to another, incorrect trailhead. This gave them a few more miles to do, plus another hill to climb to get to Twin Peaks.

I looked through the register. The views didn't seem to thrill anyone.

We started down together, and on getting back to the proper trailhead, I gave their drivers a lift back to their vehicles further down the road.

People in the local chapter aren't made to feel obligated in any way to fulfill their agreements, as set by the Club. I heard that leaders were being enjoined to schedule an activity, with no sanction applied if they canceled, even repeatedly. A for-profit organization would quickly be sued for fraud, or false advertising, if they had such standards. I have noted some activities scheduled annually for almost 30 years, and never led successfully, if ever conducted, even. The logic is that it's free, so what does it matter?

With global warming concerns, it seems a bit wasteful to send people, in apparent good faith, to a distant trailhead, for them to find that no one shows up. Why honest and good participants are not worth a local, or ten cent phone call to save them hundreds of miles of driving, let alone spare the poundage of carbon dioxide and other pollution spewn into the atmosphere, is beyond me. However, this gets the strongest support from this local chapter.

As vociferously spoken once by an outings chair, "The Club is not responsible for trips!"