Two hikers met me for this one day, late season climb. I had once tried a couple of times, from different directions, to top this low, but prominent peak. It is seen straight ahead, from I-80, as one passes eastbound, at about the Highway 20 junction past Yuba Gap. I now knew a good way, so led this activity to show, and take, others. 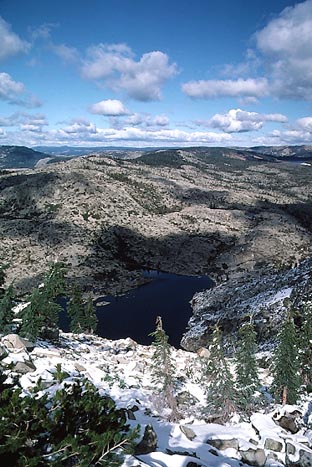 Coming to Cisco Grove Exit, we found that new snow had fallen. Luckily, we had a good vehicle, so easily drove over the few inches of fresh, light powder. We stopped at the point where the rocky road to Fordyce Lake began to descend down to this reservoir. We hiked along this snow-covered road to a jeep road headed left. We clambered down steeply, a few hundred feet to Fordyce Creek. Care was needed to hike over the slippery, snow-covered rocks.

Crossing the creek can be a real problem when water is being released from the dam. Today, it was a rock hop. We used the good footpath leading downstream along the creek, for this part of the canyon. We came to one of my favorite spots. A waterfall and cascades, through light tan rocks, made a pretty scene.

From about this point, we headed up cross-country through brush, rock slabs and rubble. It is about 1,700 vertical feet, of this, to get to the top. Being my third ascent, I knew what lay ahead, and how to best get through all this.

To his own detriment, the well-equipped hiker decided to go his own way. We called to him, and waited, but, knowing some persons, assumed that it was futile to tell him which way to go. I saw and figured he was headed for some cliffs to do some rock climbing or scrambling. Good Luck!

I took the other hiker, who followed me well. We passed a small mine, with its own short section of road. The top was reached at about 1:30 p.m. It was a bit cold and windy. The snow made for scenic views. Only the top few hundred feet of mountain now had any significant amount.

This hiker didn't know enough to bring a warm cap or hat. He was clad in denim. I know many hikers dress for fashion, rather than for comfort. This local chapter generally rejects hi-tech, outdoor clothing. Expensive, and you don't need it, by them! K-Mart, not Patagonia!

We started back soon, and gingerly clambered down through the brush. On our return to the dirt road along the reservoir, the snow had all melted. Our missing climber then appeared. He said that he had tried to rejoin us, but then we were gone.

We hiked back up the road to the vehicle. Driving back out, we were onto I-80, and home.