With some slight energy, and on a roll of sorts, I decided at the moment to head for a short road trip. Initially, I made motel reservations, but forgot about my lack of a physical ID. Phoning the separate motels, I found that I would only be allowed at the Yosemite Bug hostel. It would be okay in Merced, but I wished to head for the CA Coast.

Cancelling so many stays, I decided to motor out anyway. Taking I-580 south, I went over Carson Pass on NV/CA 88. My dash cams would be running, and editing and posting the 4K videos is a joy. With stops to use my pee bottle, I made it to the Supercharger in Jackson, CA. At the nearby restaurant, I ordered coffee and a blueberry muffin. The charge went fast, and then I was off southbound on CA 49.

The dash cams were recording, and I then got another Supercharge in Groveland, CA. With a $3.25 coffee to go, I used the saloon restroom for a dump. Making a stop at the Rim of the World vista point, I came to the entrance for Yosemite National Park. I flashed my park pass, and motored through, with a newsletter from the station.

There was snow, but I was halted as road work was ongoing. With photos of the nearby River, I finally continued on, with sights of the features. Making it to the Village, I used the restroom, and sauntered to the information station. It was near closing, 5 p.m., so I chatted with some rangers about the future plans of the park. They said that they could do nothing about the past issues that I had with the hiking club, and said that due to Covid, did not have time to deal with new issues, yet. Given a form to fill out to be submitted to the park administration, I then left.

To the Lodge, I had some dinner, and the cafeteria kiosks are now gone. They still took convenience payment, to their credit.

Motoring out of the park, the slopes of the canyon were profuse with poppy blooms. It was dusk, so I captured a couple photos, being that I forgot to plug in my dash cams. To the Bug, I checked in, and had some dessert and soup.

I had the dorm to myself, but exhausted, I only used my phone to get updated. 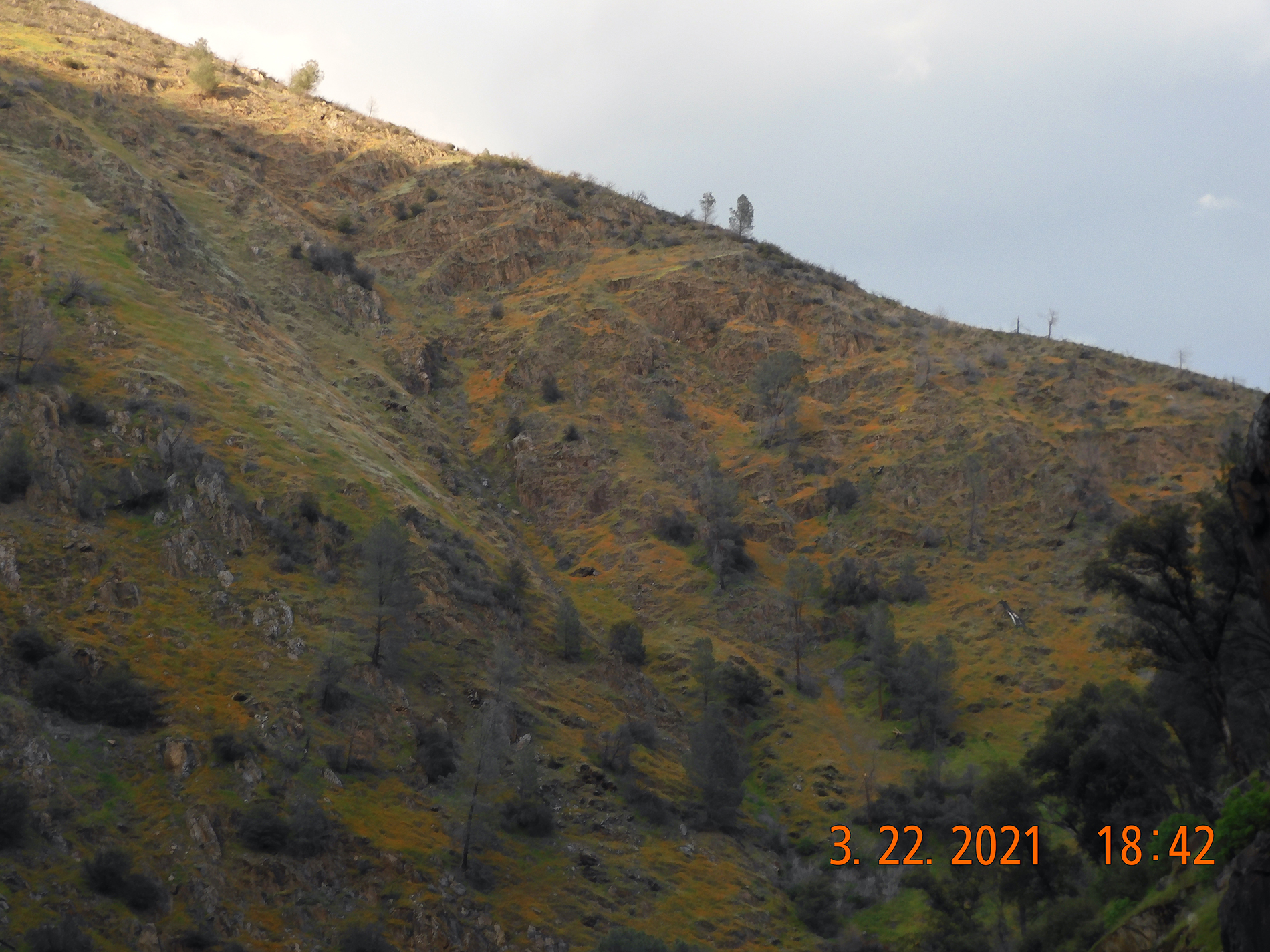 Awake Tuesday the 23rd, at about 3:20 a.m., I saw the forecast was for morning snow showers. I had a coming appointment for my home windows, so decided to head on home. Regretting that I had not made better plans, I am inconvenienced by my lack of a physical ID. I had hoped to get to San Francisco and Monterey for more travel and hiking, but not this time.

Taking CA 140 to Merced, CA, I zoomed north on U. S. 99 to be caught in traffic jams due to accidents. I stopped for a Supercharge in Stockton, CA, and had some food. An accident or some traffic delay on Interstate 5 made for photos, and then it was to the co-op in Sacramento, CA for a smoothie and video. No needy people about, so I headed for the credit union. Closed to 10 a.m., I arranged by phone for a new replacement credit card, which with a large line of credit, I would badly need.

Next stop was Old Town Auburn, CA, where I had a large breakfast. I sought to speak with the City about the plaque to a hater and his probable crime supporting ways, but they were not in. I would message them later, and I had to get back home. Tired and sleepy, I made rest stops along Interstate 80. As the plugs for the charger at Donner Summit rest area looked incompatible and then inconvenient for a fast charge, I headed for the Supercharger in Truckee, CA.

I only needed some 12 miles more of range to better be safe on going home, so successfully got that, and motored on eastbound on 80. With more traffic jams, I finally made it home, safely, with hundreds of photos and video successfully captured.

Right to bed, I got back up late to work on my website. Then back to sleep, to finish with the post later. It was some $38 for power, with home charging out and back. By Maps, I drove some 780 miles.