Seeking even more fun driving the new car and bagging peaks, I left home at about 6:30 a.m. It was my plan to place a new register book on Round Top, an old favorite hike. I also had a container, in case the ammo box was missing. Hard to stuff it all into my pack, I had problems with this as I stopped and packed it back up.

Taking U. S. 50 westbound, I came to Carson City, where I got some drink. Then to drive the new section of U. S. 395, to be able to say that I have driven all of the Federal highways in Nevada. Taking Highway 88, I came finally to Carson Pass. The parking lot was all filled up, and so was the lower Meiss trailhead parking lot. I had to park on a dirt road, where it would be safer well off the high speed highway. I didn’t display my Golden Age passport, as I wasn’t in the lot requiring this or the parking fee. Worried about a ticket, I never got that when I got back. 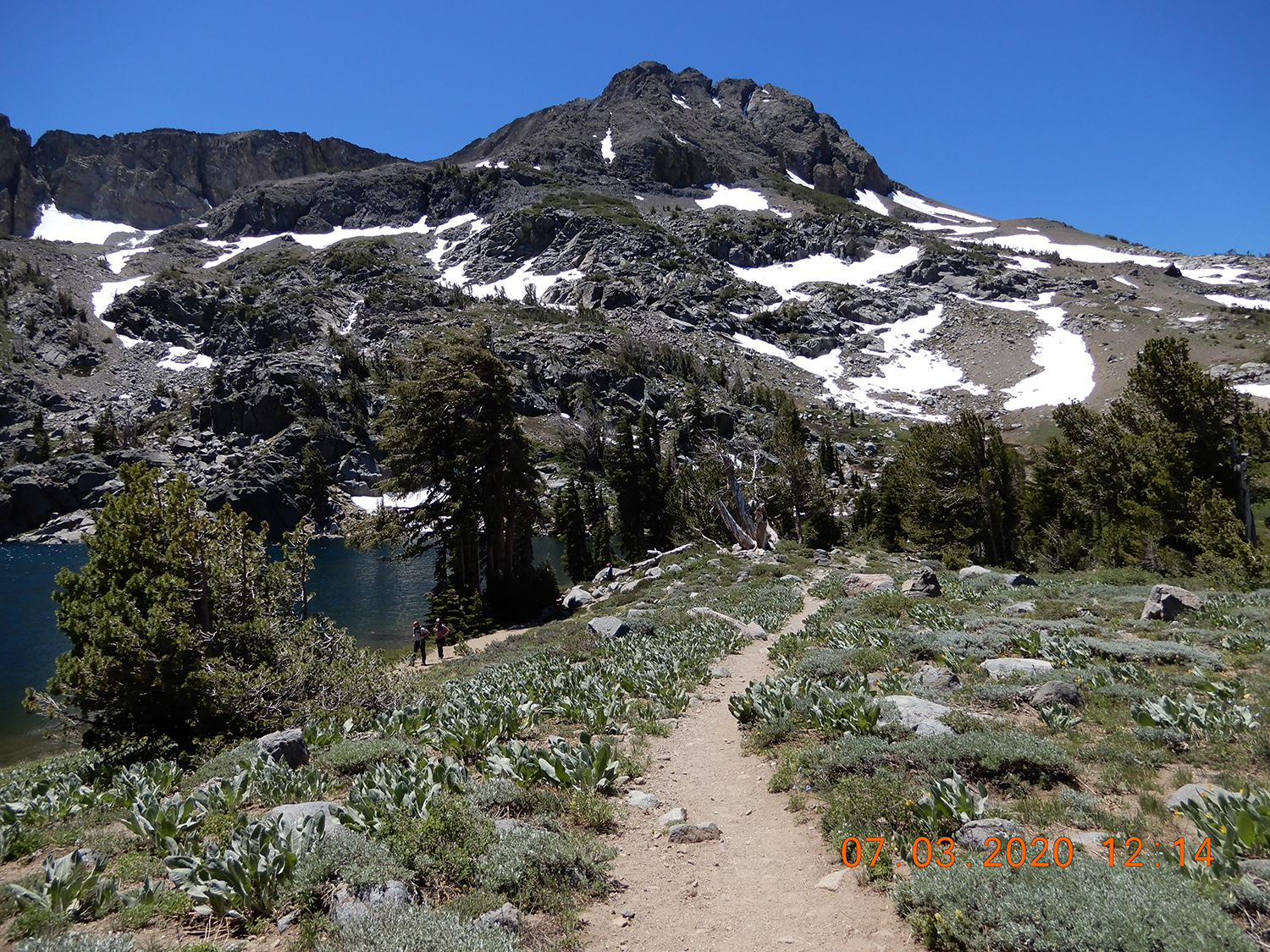 Hiking along the highway back to the Pass parking lot, I took the trail. I didn’t get started till pretty late, though I had gotten up early this morning. I had left the potted plants to watered by the new timer that I just installed. That didn’t appear to work, so the plants had to be watered manually on my return home.

More moron hikers without masks, and though I had both of mine on, they must have not read the news. Cases are more than ever, and largely younger people who must think they’re “invincible.” I stepped off the trail some 20 feet, even though there was a wind. Hikers were numerous, and I finally made it to the top of a small hill, where I took a dump into a ziplock plastic baggie. My stomach was runny, but I didn’t pollute. I left it all to be picked up on my return.

To Winnemucca Lake, I took a rest. The log bridge over the creek, was now composed of two large logs, so it was easy to cross the outlet stream, where I turned back once. Up the trail, I headed cross country, as I topped out on the trail, to head for the use trails up the peak. I quickly found the use trail, then intersected the main use trail. 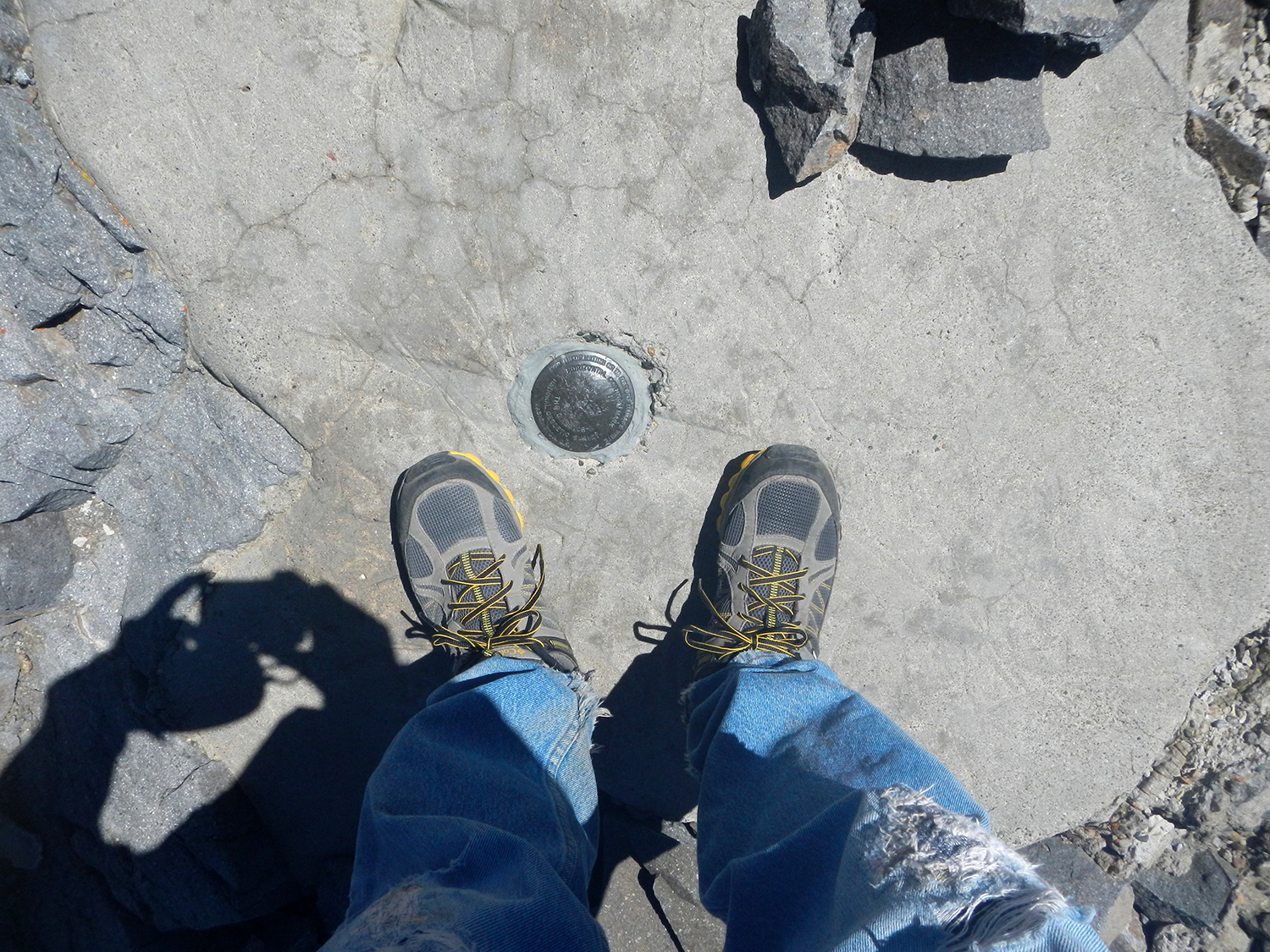 It was getting late, but I had lots of time. Other hikers came up and passed me, and then I scrambled to the false summit. Nobody was going for the true peak, so I went by them, and started the class 3 scramble. Being careful, I know the way. This trip, I had my old worn out jeans, so slid on my rear, as to not stumble or fall, as there was loose scree. My camera had gone out, back at the Lake, so I captured photos, with my old spare camera. My camera pack carries both cameras, as I had need for a new carrying case, as the zippers had failed, way back when.

I made it to the top at about 3 p.m., so then I captured the view. It was the same old thing, but then I thought to take photos of the two books of the register. The ammo box was still there, so I carried up the container for nothing. Lower down, I had run into a ranger, and he said it was okay to leave a register. I placed my new book, and then captured every page of the books already there. I didn’t take photos of the paper scraps, as it was somewhat windy. I used my boots to hold the pages down, and managed to get every last page.

Finished with the summit tasks, I scrambled back down. The other hikers had left, so I was alone. Back to the better use trail, off the class 2, I saw two other hikers headed up. Off the peak safely, it was to go back down the trail. Most hikers had finished hiking, so I had a lot of the trail to myself. I found my poop bag, and stuffed it into two old shopping bags. Now throughly sealed, I tied it to my pack back pocket.

Morons on the trail were doing their evening hike, with their dogs, and they came up behind me, to even get close. I admonished them for failing proper social distancing. Back to the parking lot, I hiked along the highway back to the dirt road where I left my car. Safe then, and no damage, I feared for hiking club vandals. I put my pack and things into the trunk, then took off down the hill. I had measured the one way distance to the top from the car as 4.63 miles by my Watch app. Roughly then 2,000 feet of gain.

With no water in the car, I was thirsty and tired. To Minden, I stopped at a Chinese restaurant, to get garlic asparagus with shrimp and plenty of diet soda. They took convenience payment, so I tipped nicely. It had been late, so the eatery was closing up with only another diner. Others came in for take out, but the help wore masks and kept their distance.

Stopping again in Carson City, I had more drink, then took off east on the highway. On the Interstate, the auto high beams did work, but they didn’t work on U. S. 50. I feared for falling asleep at the wheel, but the caffeinated drinks sure helped. Stopping at a good place that accepts convenience payment, I got banana bread and rested.

Finally back home safely, I plugged in the car. It made the round trip, without need for any more charging, with even spare miles. Emptying my waste into the toilet and also to put the poop bag into the garbage bin, as it’s too much trouble to wash it out into the toilet. I saw that the timer with the drip irrigation didn’t work, so I had to water by putting the pipe directly into the faucet. I downloaded all the camera work, and even had gotten a repair form filled out by nikon.com. With my main camera needing repair, this may take a few weeks, so no road trip till I get the camera back. So now likely August to head for the Continental Divide. Maybe even to late September, to make it one trip.

It’ll be day drives to more local peaks and hikes. It feels good to rest, and to bag the local peaks again. To bed late on July Fourth early morning, I had gotten my first call by the car, from family. Sister was told about my new car, and she said, “Wow.” It went through the phone, and it was pretty cool. Though I was parked, it can come as I’m driving, with hands on the wheel, to just tap on the 15” screen. Before, I needed my AirPods, but now it comes through the car speaker. This car is fantastic, and I’m so glad that I bought it instead of a Leaf.

I started on my post the next morning, and will have to do something about the watering timer. It’s a holiday, so no shipping for the camera. Glad to be back to my computer, safely from another peak bag, which others had refused, as they declined to “risk it.”

Capturing all of the register books, I will only post a few pages, the rest for review. There was art, and funny comments. I didn’t do any video, as the 4K camera had frozen. I had the phone shut off past Winnemucca Lake, so no summit twirl, and therefore no 4K proof. I did leave the new book, and signed in the old one. Other climbers that I knew had signed in, and I can show the signatures that the hiking club claimed to show that they were there.

Still many do not bag the true summit, as the local hiking club also refuses. I know from my last time, that they didn’t sign in, but they do claim it, so potentially a fraud. Some climbers do truly bag it, so they’re alright. Once on a spring climb of a snow couloir, the leader had said, “Damn it, I’ll give you credit.” It was white out conditions, and really bad weather. I topped out on the couloir, but didn’t bag the highpoint, but probably was close. So, as the leader passed away, I count that as a peak ascent, the only time that I did that, in memory of the leader, who had been the Rock Climbing Section chair, and also a good companion.

A few Club members did sign in, but not the ones that run the website for the peak list. Each to their own, it is honor system. That they’re too scared to bag the true highpoint, so it seems to go with other class 3 peaks. I’m an experienced climber, so I do the class 3. Too much for the others, I deem it safety. Better to lie and claim the summit, then an accident and then rescue or even death. Not for me, as I like climbing to the top. It did take me longer, with some risk, but then I sleep good at night.