I had figured to give Meet-Up another try. My lucky peak is Sonora Peak. Doing this easier one usually solo as a conditioner before harder High Sierra peaks, it has served me well. Harkening back to about 2003, the last time that I climbed this peak, I had been excluded by a GBG group. Seeing how I was now in Reno, and seeking to get some peak bagging going, this looked like a good start.

I got a few sign-ups. The day or two before the trip, I requested confirmation. Some hikers had set their messaging to be blocked. None of them showed up. Others confirmed, so that gave me faith. I got one sign-up at the last moment, but for him, it was too late to get a confirmation back.

Friday, I had found a good man to do some yard work for me. I also set out to do some retouching and painting on my door installation, which had caused some damage or needed some repair. Feeling good, I then maybe figured to cancel and stay home to work on my house. But, there was no rush when it comes to peaks and my health! 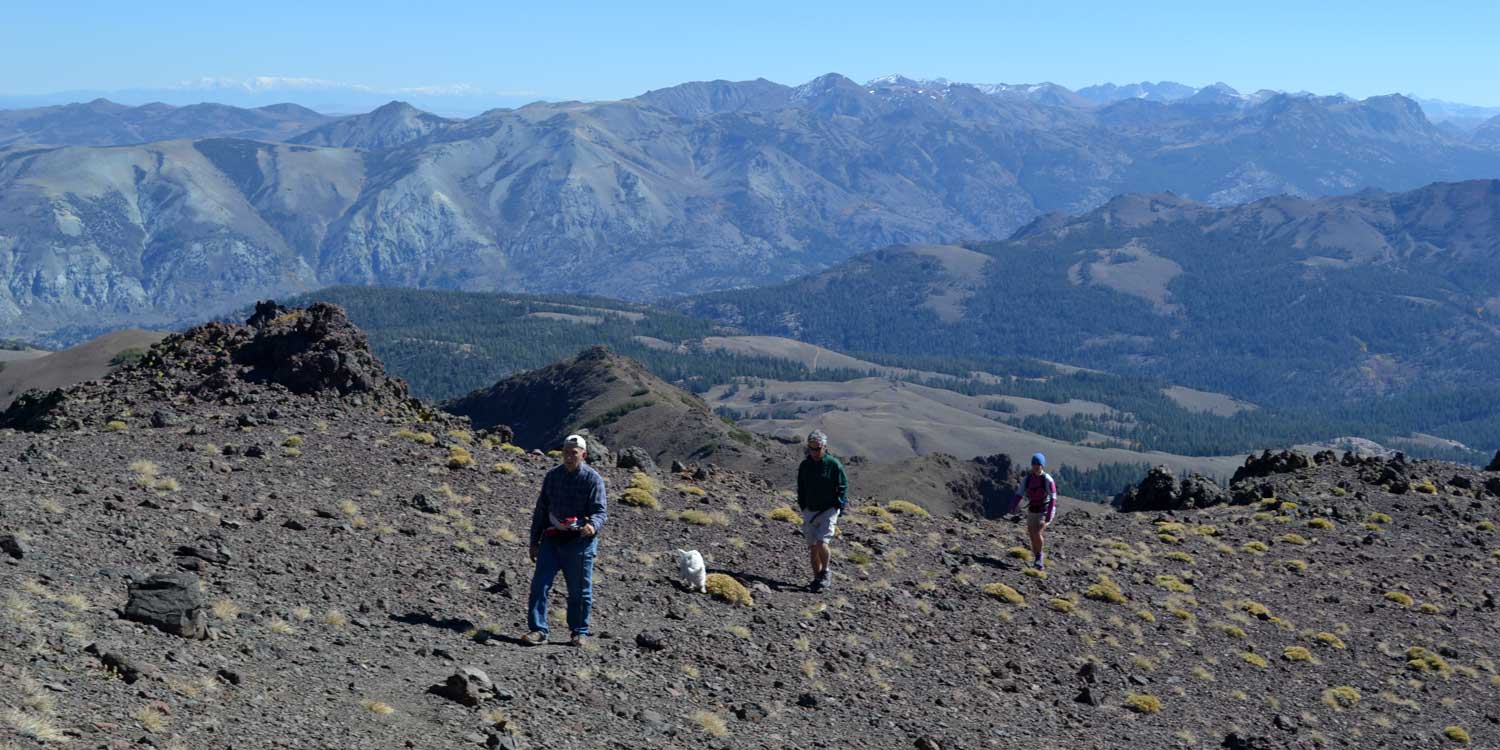 Getting up at 6 a.m., Saturday, I prepared my things, and had breakfast. I had downloaded a new Meet-Up app, which is buggy. Notifications come in slowly, as late as an hour after I get a message on my Watch. But again, I had to do this. I figured yet that no one might even show up.

Getting to the Mall meeting place park and ride, as mall management had helpfully advised, people were there. All older males, with one game female. I had prepared for a three day weekend, as there were fall colors, and another possible peak. I offered to give a ride, but was refused. We then drove off in four separate cars, with one person coming to the meeting spot a bit late. I had given him a look as I motored off, but didn’t get any look or response back. There were six of us, total.

With road work on U.S. 395, we lost perhaps 15 minutes on our driving time. I had allowed for 45 minutes for stops and what from the computer suggested time. Getting gas in Minden at 2.499, I nearly filled my tank for $20. Having my dash cam running, we made good time on the driving south.

Motoring up CA 108, there were fall colors and troops. I arrived to the trailhead by Sonora Pass about 15 minutes before our set time, 11:30 a.m. Some were there, and others pulled in. A good bunch of carpooler hikers.

I made sure everyone could understand the peak hike. We were going into wilderness. As lightly clad as they were, and with smaller or no packs, an immobilizing injury could result in death. It was windy, and helicopters most likely couldn’t hover for an air extraction. The nights get cold. I didn’t know if I had the energy to bring up my sleeping bag to help someone survive the night at altitude. Mostly no one listens to me. Hikers don’t think for a worst case scenario. It appears that many hikers, with my website and offers, would rather die or suffer incredibly than ever speak with me, or read what I have to say. You can only do what you can do.

The others got ahead as we hiked up north on the Pacific Crest Trail. Two were in shorts. I suppose they were too cold to go slowly. I am slow, and stayed to my easy pace. We had a couple stops, as there is a point where we leave the trail. Some got way ahead, and if they didn’t wait, they would be considered to have left the group. I then advised of the saddle ahead where the use trail begins.

Water flowed in at least six spots. At the saddle, where the use trail heads up the ridge, we had a good rest. I had my energy drink. One fellow was game to head on, quickly. I advised him, and allow as Meet-Up group organizers are stated not to be leaders. We have no control, therefore no responsibility. He headed up the steep use trail, and another wanted to go, too. I advised of getting off-route, and onto class 3. Easily done by novices, she stayed with the rest of us.

Finally, I had my rest. We started up the use trail. It is steep and rubbly at first, and I tried to show the way. I wasn’t used to this, not having done so steep for perhaps years. I kept slow, for the others who then started to fall behind. Shortly, some saw the other fellow on top of the peak already. He must have been really fast! My legs were weak, and I couldn’t go as fast as I used to.

The gradient lessened, and we gained the high ridge. The use trail is distinct, and one or two went on. I took photos of the others following. My uphill gain legs must have been better. The use trail went nicely, and soon we were approaching the top. Rick came down and spoke with us, as he was so fast. We made the summit, and the others went to a lower rock ring, while I snapped photos.

I did my 360, then telephotos. The summit twirl a few times to get it right. I took pictures of all of the register pages in the newest book, and signed myself in. The others weren’t too sociable, sticking to themselves. I had even been advised to heading down as a group decision. I feared the others, being too cold and disliking the wind, would just summit and start down. I said that I don’t force people to stay on top. This is a Meet-Up group. They can leave at any time.

It wasn’t so chilly that they started down immediately. I enjoyed being on top, taking plenty of photos, and admiring the view, and the fact that I was here for my 6X. They finally came by and signed into the register book, and took some summit photos. They headed down, and I then followed. I kept my camera to video for movie clips, and then we gently descended the rubbly, steeper parts. I had to rest my legs.

To the PCT, a backpacker chatted with one hiker, and I rested. Drinking a can of soda, I allowed the others to head down. I was toasty warm, but I don’t force others to freeze. I enjoy being up high, and looking at the views. While resting, I took more videos and photos. My hat blew off down a scree gully, so I had to get it. That took time and my energy. The rest of the group disappeared down the trail.

Hardly possible that I’d injure myself and not be able to hike down, but I did mention that my comments on Meet-Up had mostly been deleted. Somebody doesn’t like me there! I didn’t expect that I’d last too long on Meet-Up, as in Sacramento, they banned me fast. One organizer requests money for the hikes. The mountaineering group demands dues paying membership. I’d be free competition. Someone they’d have to eliminate!

I posted that I’m 63 and diabetic. That all got deleted. None of this group had ever seen any of that, by them. That was only up for less than a week. One mentioned that she showed up for one of my future hikes, albeit scheduled for next Friday. No one was there, yesterday, by her. Can’t do calendar? They can’t read very well or listen. Many Meet-Up hikes are walks in the park. I have to make it clear, mine are rugged, far more difficult, peak climbs. I have to fear for delusional or mentally ill, even suicides.

I stopped for a clothing break on my way down, and another selfie video. Close to the cars, I enjoyed the sun, and the views. Imagining that I’d be staying overnight, I had only a little driving to then do. Back to my car, the others had gone. One left a note on my car, but I didn’t see it till later.

Using the restroom, I had my pee bottle but never used it. I had to blow my nose, too, but keep the throw away tissues in my back pocket. I offered the national forest my volunteer work, but they just put me off. They disallowed for me to either place or remove registers, and seem to have some legal point on people’s garbage as personal property. Surmising a special deal with Meet-Up, I can understand that some rangers really must hate me! I pay trail and permit fees, but that’s small compared to tech groups, and big clubs. They don’t want my registers, so be it.

I had to turn off my phone, being over 10,000 feet elevation. I failed to remember my passcode, having just reset it. A big sticking point that may have led to me going home. Adjusting my cameras for the drive east on CA 108, I let both my dash cam and main camera run. Some fall colors, but I expected to do big on the next day. 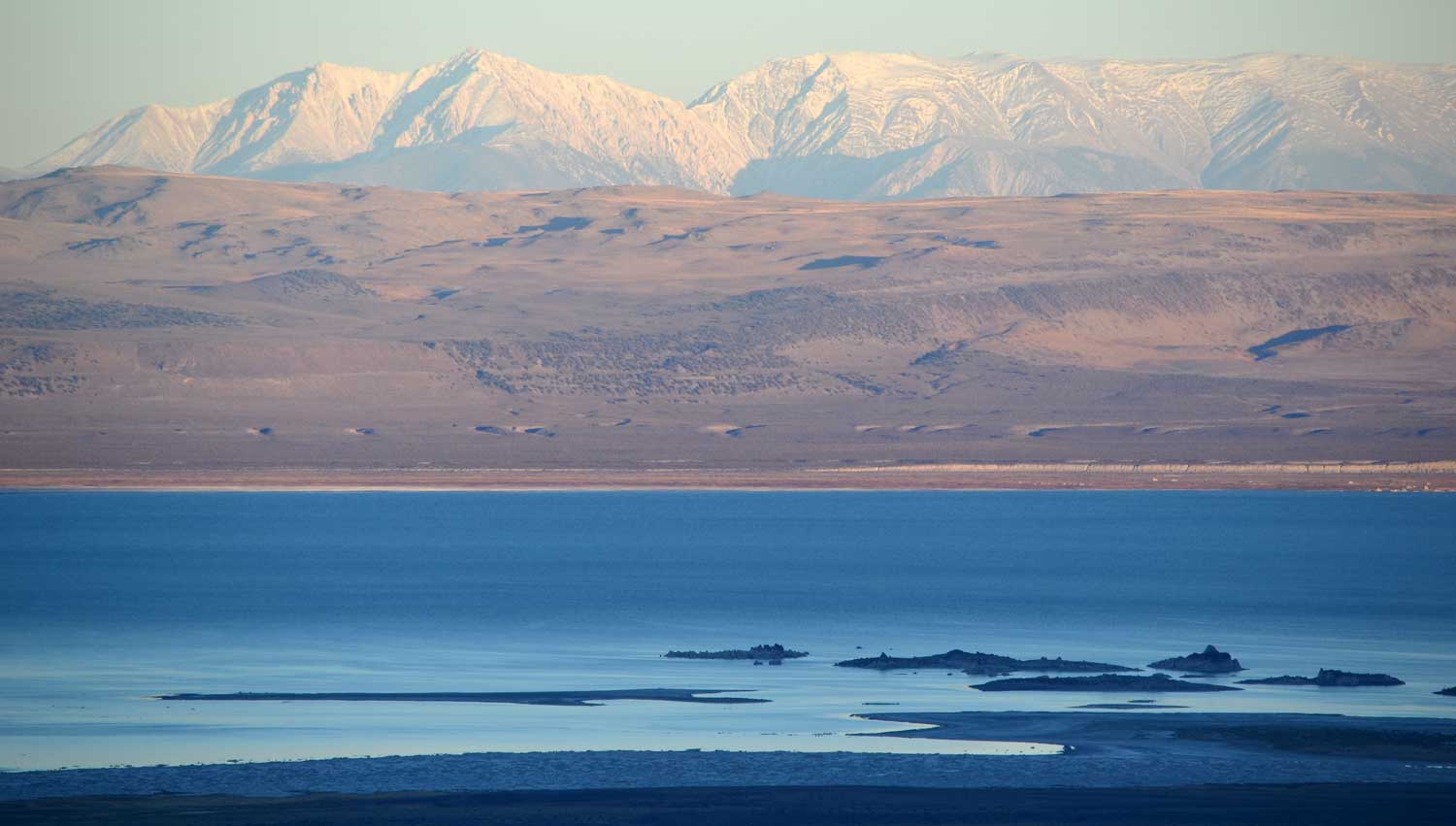 Heading south on U.S. 395, I came to Mono Lake vista point. The colors by Conway Summit photo stop saw throngs of photographers with tripods, but I’d do better, or not. Capturing the alpenglow with my telephoto lens, I headed on. Dining at the main restaurant in Lee Vining, CA, they were celebrating their 50th anniversary. I had eaten here first in 1970. Many peak bagging trips had stopped here for the Sunday night all you can eat chicken dinner, in the early 1970’s. That ran some $5, then.

So, in the dark, I found that Oh! Ridge campground was signed “Full.” Similar for New Shady Rest in Mammoth. Trying Motel 6, they also were booked up. I didn’t see so many people, but some said that this was the last weekend of hunting season. Now living in the Eastern Sierra, and being possibly tracked with my phone, I decided not to dirt bag camp. I’d start on home. I didn’t feel like sleeping, and can return with only about a 150 mile one way drive, about $10 worth of gas.

I had developed some feeling of being discriminated. Nut jobs go off, shooting people randomly, and it is blamed on color. Some people just sense that they are disliked, and I am aware of the hiking clubs. Too aware of hate groups, and how many people don’t wish to run afoul of them, people of color are just hated, disliked, or avoided. Used to be, if you didn’t do as hate groups directed, you were then a target. Maybe still to today.

It’s a busy holiday weekend. An article in the L.A.Times indicated about fall color along U.S. 395. It was record heat in Southern California. I wouldn’t have expected busy, as other similar weekends, there wasn’t the crowds. Lesson learned.

I drank tea and coffee, and a motel in Bridgeport quoted, about 132. With little traffic, no deer on the roadway, and nice driving, I made it home at 12:30 a.m. I had truly forgotten my phone passcode. I had also forgotten that my tablet ran with 4G, which I had shut off. The free Wi-Fi ops in Mammoth were still dismal.

So, I may try to run a fall colors easy hike and drive, when it gets good. I have two evening hikes, for this next week. Meet-Up is working out better than in Sacramento. Not much hope for a peak bagging Meet-Up group, as others go faster than me, and I don’t know for how long that I can keep this up. I have scheduled a Thanksgiving peak bag, and have an idea of a Christmas peak week. We’ll see how it goes.