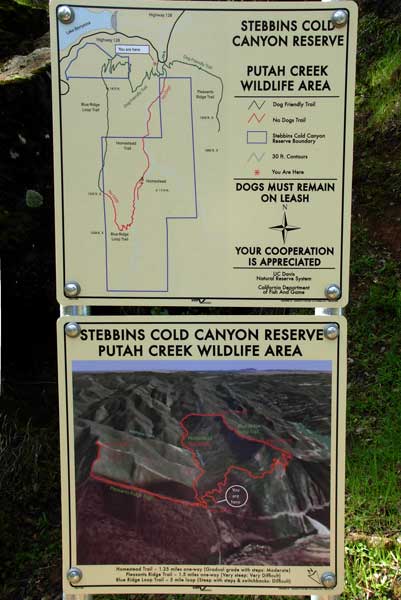 Ready for some spring type of hiking after the days of rain, I motored over to the Stebbins Cold Canyon UCD Reserve. On my driving approach, I saw that the day use areas along CA128, for Putah Creek public access, are now fee areas.

Arriving to the primitive parking lot, I was lucky to get a spot. There is still no facility here. Cars were parked everywhere, but I started my hike at 12:30 p.m. I feared for my car, seeing the many careless people at some trailheads. It was to be O.K., but I hurried along on my hike, anxious to get out of here, today.

Already, I could see the trail anarchy. Dogs were being run unleashed. They also leave their droppings behind on the trail, and perhaps disturb the wildlife and flora. Nobody patrols the trails, so hikers do as they wish. Being that this was a holiday weekend, I suppose that it might be as bad as it gets, though.

Taking the side trail to the dam overlook, I saw some few wildflowers. There were some bugs, including mosquitoes, although none had landed on me. I had encountered mud, well lower, but resigned to cleaning my boots later, I had proceeded. Perhaps 30 hikers were to be seen by me, today. More dogs were on the trail, and gratefully all of them were behaved, well enough. The trail is pretty narrow, though, and unpredictable animals can attack.

Shooting a few panoramas from about the top of the first bump, I didn't rest very long. Another dog disturbed me as I stood there, sniffing and moving right up to me. I soon left, as more hikers and their dogs were following.

The trail was all damp, not the baked dry dirt that I hoped for. Some turkey vultures flew about, and Sacramento was barely visible to the east. I wanted to get this over with! I ran into more hikers, one asking about how far it was, despite the new map at the start, and the many mileage signs along the way.

Bagging the highest bump, even though I do not "count" these, I sought to saunter down safely, apprehensive of the mud which I knew lay ahead on the trail below. I slowed a bit to enjoy snapping close-ups of the flowers and mushrooms. The wood stairs weren't slick or slippery, but I can see how there can be a hazard.

The fallen tree at the Homestead could now be avoided through a slot formed around the tree, and I shot some photo records of the rock walls. I had taken some photos of the clear waters and small cascades of the main creek, which presented the usual, three foot rock hop to get across. 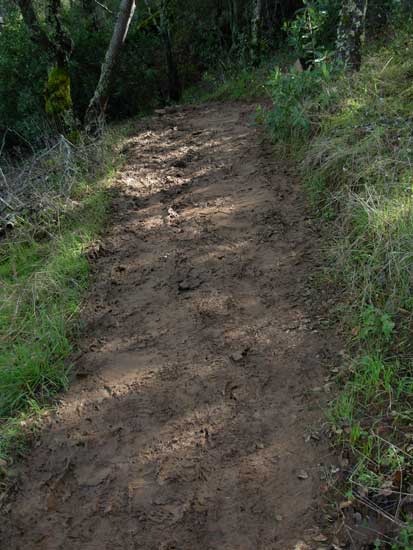 Some trail trenches with slippery mud caused my boots to slide a bit, and get even more muddy. I can stow the older boots in my car, and use them on another muddy hike, then jet spray them clean when I get my car washed. More hikers came up, but I thought that I'd shortly get back, as I did not have much time or any will for Pleasants Ridge.

Back to my car at about 3:45 p.m., I changed into my sneakers, and put my muddy boots into bags. I had to watch for traffic, listening for cars coming around the blind curves.

Motoring back home went quickly, and I had done the usual 4.75 miles and 1,500' gain. I captured about 160 images, and spent nothing. The round trip drive was then the usual 80 miles, about two gallons of fuel for me.

I have another few local trails to check out, and I will no doubt see many hikers, as can be expected with the long stretch of nice weather to come. Seeing shooting stars, paintbrush, warriors, and other tiny flowers, the bloom has started. I'd love to be in the Desert to see how good it is, this year.

I had thought of doing a solo ski tour in the Sierra, but now the snow might now be rotten. It has been warm and sunny, the worse thing for powder. I wished to get some digital images of the trees decorated with snow, but with the way it has been, the roads might be closed, or requiring chains, to get up there with those conditions.

Nice to do this hike without any big problem, I intend to continue to do my hiking with gain, in preparation for some sets of peaks to climb!