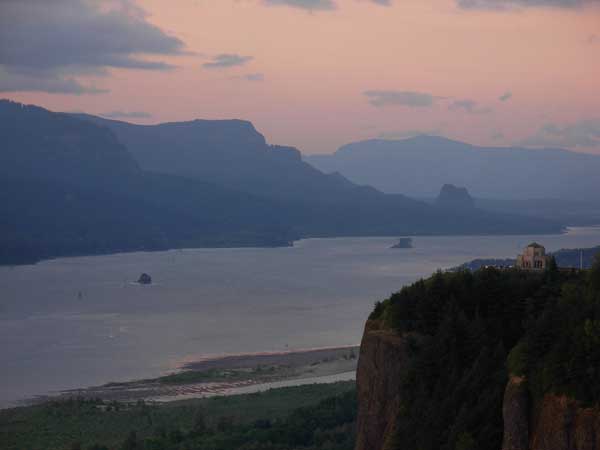 Resolving to have another peaks adventure and road trip this summer, despite global warming and all, I set out to do a modest itinerary of peaks and hikes. I can do better without some partners, and with my sleeping, it may be best to travel alone.

Making my reservations the night before, I left home by 8 a.m. to head north on Interstate 5. I had to make Portland tonight, a 650 mile drive. My main problem was a lessened ability to make it between rest stops, and for something fairly new, to test out my handheld Internet device using free Wi-Fi ops. The trip went beautifully, otherwise, and I didn't have any accidents, or to have to spend too much money.

Passing Mt. Shasta, I managed to record the abundant snow on the peak, still ripe for snow climbers. I began to connect with my handheld device, making use of the free Wi-Fi ops at my favorite fast food eatery. It was fantastic to know the weather, traffic, news, and a wealth of other updated information, all at a touch of my finger tip. Some places had no such connection ops, and I kept notes.

North then, through Oregon, I watched my time. It was a long way still to my first destination, but I knew when I reached Eugene, the driving was to go faster. I enjoyed making stops, and trying my device so many times. I spent for drink and tidbits, keeping hydrated, and to stay with enough energy. I had some thought of doing light hiking along the way, but I didn't have the time, today.

Finally, I was approaching Portland. Into the town, along I-205, I stopped at a vista point for some quick photos. There was plenty of daylight and time. I was now in the Pacific Northwest! Getting my motel room, I tried my paid-for motel Wi-Fi connection and it didn't work. Perhaps I did something wrong.

I had to look at my paper map to refresh my memory. It was then to the Portland Womens Forum vista point for the dusk views of the Columbia River Gorge. Clouds, today. Other people came by, but the sunset wasn't too good. It was about the same as my previous two times here, but I snapped pictures, anyway.

Back into town, I had a night walk for exercise, and dined at a nearby restaurant, with breakfast for dinner.

Up early Friday, I had a long way to go, again. I made a morning stop at Multnomah Falls for more photography. Then, it was along Interstate 84 for sights along the Gorge. I have already seen most of the towns, so I declined to hike the main streets in Hood River or the Dalles. I then took Interstate 82 north, to turn right on WA 730. Mostly, I couldn't stop for the views for the Columbia River, so have to come back someday. 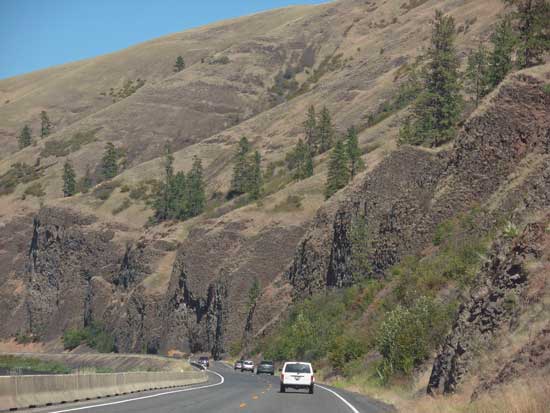 There was road work, and I had to go. Luckily, services are predictable, and I tried to be generous when using a restroom. I am on a diet, or I'd have bought more food. Coming to Walla Walla, WA, this was a town that I wished to see. It turned out not to be too much, with only one highrise of sorts. I sped on, and followed Highway U.S. 12, east. Passing then through Clarkston, WA, and Lewiston, ID, I didn't have time to revisit a vista point with a great view of the two towns and rivers.

This highway is rated scenic on my maps, so I had to see it all. Nice canyons and scenic forests stretched on, but the driving was tiring. I got gas in Orofino, ID, a nice town, and then roughly followed the route of the 1805 expedition, by the history. Distressed a bit to see a sign announcing winding road for the next 99 miles, it turned out not to be that bad. I drove on and on, seeing very little traffic. I made a stop at a trailhead to walk over a footbridge, and captured views of the Lochsa River. This is one remote area! Lewis and Clark went a long way through this mountainous country!

Keeping track of the miles, I made an interesting stop at a cedar grove, unknown then, to me. A short paved trail leads into some bigger trees, providing a photo op in shadow. Going over Lolo Pass, I knew then that I was close to my night's destination. Happy to see civilization again, I had a burger and more drink with my Wi-Fi connection.

Wandering a bit to find my motel, the sunset cast an orange light over the old part of Missoula, MT. A photo op that I couldn't capture, due to my driving and urgent need. It looked like mostly younger people enjoying the evening out, on tables along the streets. I got my room, and looked for dining ops with my few apps. Too late for photos, I had another breakfast for dinner, and steeled myself for a peak the next day.

Hardly spending more than several hours at this luxury accommodation, by me, I woke up and left for my hike. One of my directions was wrong, but I double check on peak information. I took the right way, and shortly was motoring high on forest dirt roads, approaching my goal. The distance to the trailhead was shorter than I thought, so I was able to start my hike before 9 a.m.

It was an easy trail hike to the top of St. Mary Peak. Several other hikers were about on this Saturday. I snapped photos, with good wildflowers, and views of the Bitterroot Valley as I climbed. Soon, I caught sight of the lookout atop the peak, and was chugging up the switchbacks above timberline.

Summiting after some two hours, I began recording the view. Keen on doing panoramas, I made sure that I did it right. The ranger lookout said it was hazy, and he chatted with me for awhile. I got the names of some of the other peaks, and Trapper Peak, far in the distance, was seen. In 2007, when I hiked that peak, the highest of the Bitterroots, fires raged throughout the state. I was lucky to get any view, then, with the heavy smoke. That day, the smoke settled into the valleys.

Not staying too long, I began to hike down after getting my pictures. More hikers were coming up. I tried for more flower close-ups, then the car came up so quickly. I motored down slowly, not wishing to stress out my vehicle, then was back to U.S. 93.

Having more things to do and see, I motored south on the highway past Darby, MT, a interesting town, then past good scenery with sights of more peaks of the Bitterroots. Up to Lost Trail Pass, I was disappointed that there were no great views. Taking then MT 43 east over Chief Joseph Pass, I enjoyed motoring along, seeing new country.

The Big Hole National Battlefield was closing when I got there, but a nice ranger told me that I could still hike the trails. Jumping at the chance, I saw the nice wildflower display and the Nez Perce village, a solemn locale. I snapped my pictures, and left.

The low light while cruising MT 278 made for new sights, with few cars. I wondered what the names of the peaks were, but I had to get to my motel in Dillon, MT, along Interstate 15. I had time to walk the old town, and found a quiet place for my best meal for the trip. Back to my room, I could relax with a peak success, and then a glorious national park visit, coming the next day. 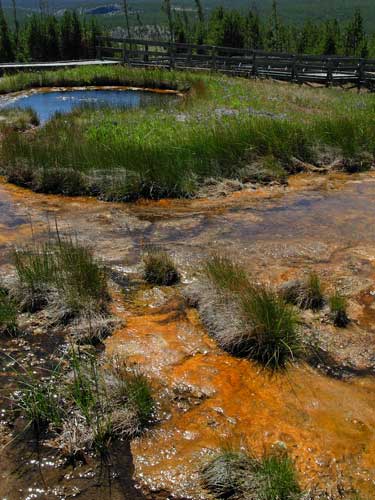 Up early again, this Sunday, it was to take some time to drive MT 41, then MT 287, to U.S. 287. I made a longer stop in Ennis, MT, and then saw Earthquake Lake. A landslide had formed this feature, and it made for geologic interest. It had a visitor center, but I had to get to West Yellowstone. Then, Hebgen Lake made for another sight.

After a rest stop, I entered the park. I bought an $80 annual Interagency pass for many more park visits to August, 2011. I had regretted that I didn't make a side trip to Glacier National Park, but I wouldn't do any hiking there, and have seen it before. Global warming is said to have reduced the snowfields and glaciers to a fraction of what they once were.

I started to enjoy my visit. Lots of sights to see. I was intent on seeing what I had missed, my last time in 1999. Stopping first at Tuff Cliffs, I took a short hike at Terrace Springs, Fascinating! It was north to Mammoth Hot Springs, and I took the side loop drive. The formations made for good photos, then it was over to Undine Falls, and then a petrified tree. I captured more views, then headed south past Mt. Washburn, an easy peak that I would hike if not for grizzlies.

I knew that I'd spend a lot of time at Yellowstone Canyon and Falls. I wanted to shoot the scene with my digital cameras. It was late afternoon, so the falls were backlighted. I stopped first in the Village, and to get directions. At the visitor center, I was looking at a map when the help pulled it out of my view to show it to another person. They have poor maps, and have changed the overlook road to one way since the last time that I was here. I figured it out, and soon came to Lookout Point for my first panoramas. I next visited Inspiration Point, then hiked down to the brink of the Upper Falls.

Driving around to Artist Point, I captured more panoramas. It was getting late. Finished with the falls and canyon, I headed south. A delay on the highway was due to gawkers, with buffalo crossing the road. At the mud volcano, a bison was grazing. I left to continue motoring south past Yellowstone Lake. In the low light, I hiked the Geyser Basin and saw an elk. This was great! I never considered myself a wildlife photographer, but now I had nice digital movie clips. This uses a lot of memory, so I had to change cards. I had some worry about batteries, but I was to have far more juice than enough.

There was no time to see Old Faithful again. I headed out of Yellowstone National Park and into the Grand Teton National Park. The sun was setting as I got there, and I photographed the sight of the peaks. There was a full moonrise, too, and I continued south into Jackson, WY. I had food, and checked with my device for the directions to the campground. It is a small miracle the way you can do this, now.

Getting there late, I found a spot to camp, and had a nice sleep in my car. I was pleasantly surprised that there were so few mosquitoes, here, if any. I had been bitten, though, at Yellowstone Lake, in one spot, as I got out of my car to snap a panorama.