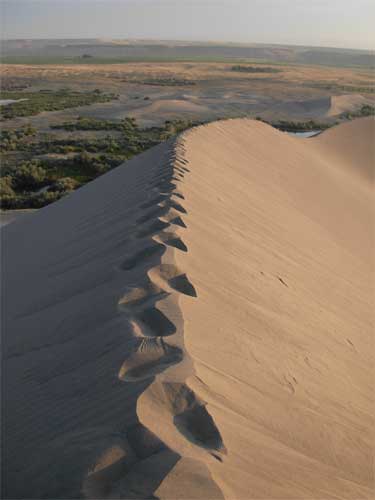 Due to hot temperatures for forecasts at, or about, my destinations for much of July, and with cooler highs, locally, I delayed my summer road trip and peaks adventure, time after time. I discerned a weather window of cooler highs come August, but now, there were wildfires, and Montana and Idaho were said to be the worst hit states in the Pacific West. I phoned the ranger stations by my peak locales to determine whether to go. They were noncommittal, saying conditions changed from day to day, and it could be anyhow by the time I got up there.

In my usual spirit of adventure, and figuring summer would be over by the time things were perfect enough, I decided at the last moment to go. I made quick preparations, and thus failed to do enough research on the Net, leaving me to determine things when I arrived there. I can study maps and material in my car or motel room, then decide upon a plan of action for the next day or few.

I left home at 8:15 a.m., Sunday the 5th, and motored east on Interstate 80. I found some great deals at the Patagonia Outlet in Reno, and spent many of my crisp, new, bills already. I had no reservations for tonight, hoping to get another good deal at a motel or campground along the way. I made it to Elko at an good hour, about 4 p.m., so I chose to take NV 225 north. This was another highway I had never seen completely, turning into ID 51 over the border.

The scenery was slightly different, with desolate Wild Horse Reservoir, then the Owyhee River Canyon. I enjoyed the new views, and the little towns, more wide spots in the road. Crossing into Idaho, I reset my clocks, and came into flatter land, the typical Snake River Country. Clouds to the west were backlit nicely, and I settled into my road trip adventure mood.

The town of Bruneau, ID, was mostly closed up, so I watched a sunset from the Bruneau Dunes State Park, where I planned to camp. I paid the entrance and camping fee, and found a spot easily. The restroom building was being renovated, so portable outhouses were in place. The smell permeated everything, and I was to suffer from this for a few days, the stench getting into my clothes, hair, and car. I didn't need a sleeping bag, though--it was so mild that night.

The next morning, Monday the 6th, I woke up to motor to the day use area, to hike up the dunes. The sunrise was fair, seen from the steep sands, reflecting off Bruneau Lake. The climb to the dunes highpoint took 45 minutes, and soon I was snapping photos of the scene below. Many would not count dunes as peaks, but this was said to be the highest dune system, in some form or another. Back to the visitor center, the ranger confirmed that the east dune was the highest--another adjacent dune created some doubt. 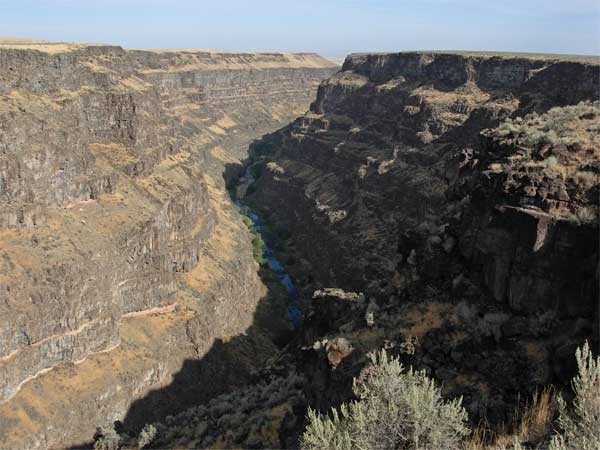 Then, it was onward and north for more scenic adventure. I saw a sign for Bruneau Canyon, which the ranger had recommended. I took the paved, then gravel, 18 mile road, and found my way to the vista point.

I was glad that I had chosen to do this! I snapped away, a sight rarely visited (photo left), I think. Only one other person was about, giving me worry about car problems or a double blowout. I had water and supplies, so I'd be O.K.

Sunflowers lined the road, so on my way out, I snapped a few close-ups. This was the best floral display on the trip, most of the other wildflowers being past prime. So, back to Bruneau, it was what to do.

To Interstate 84, I was soon to Boise, ID, which I had visited before. I walked the downtown area, and saw the State Capitol building, again. The sky was cloudy, making for different light.

Back on I-84, I spotted a sign for a wildlife viewpoint along the Snake River. Taking the side road, I eventually came to Dedication Point, a developed vista point for that part of the Snake River. A dirt wheelchair trail also leads to the overlook, said to be great for bird watching. Some others spotted swallows, and looked for eagles and hawks. I was too busy photographing panoramas to notice more.

Making a bit more of a drive, I came to historic Swan Falls Dam, and snapped more photos. These are probably underused areas, but then it was midweek.

Motoring northwest, I got my reserved motel room in Ontario, Oregon, and then a strong wind came up. I hoped this might blow away the smoke, and make the views clearer. I already had my first breakfast for dinner, being a routine for much of this road trip.