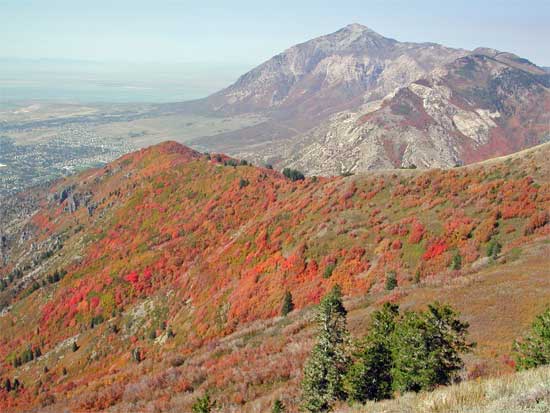 Monet never had as fine or grand a landscape as the Utah Rocky Mountains! A splendid palette of color worthy of any artist's greatness also greeted me on my fall tour around the Great Basin, this year. Having little else to do this early fall, with reasonable room rates obtainable on the Internet, I left home Thursday morning, the 28th of September.

Gas was down locally to 2.519. Zooming eastbound on Interstate 80, I made my first big photo stop at the Ruby Mountains, up Lamoille Canyon. This time, the aspen were in the middle of the fall transition, and the colors were good. Being later in the afternoon, shadows had fallen over most of the canyon slopes, diminishing the photography. I went about shooting anyway, doing the best I could. Motoring to the Road's End, I wondered about a peak hike, maybe to Liberty Peak, the next day. Well, been there, done that, twice already. If I could travel quickly enough the next morning, new peaks were waiting in nearby Utah.

Lodging cheaply in Wendover, I woke up early Friday, and sped across the Salt Flats. In North Salt Lake City by about 8 a.m., I gassed up, with some easier peaks in mind. Fuel was higher out here, most about 2.869, and up to 3.099, later, for me.

Coming to Ogden, UT, I stopped at the USFS visitor center to get maps and information. Finding the way to North Ogden Divide (elevation 6,184'), this trailhead would serve me for two consecutive peak hikes.

Starting up the marked trail to the south, I switchbacked through glorious reds of the maples, and tans of the oaks. I soon reached the higher slopes, and shortly gained my first summit, Eyrie Peak. No sign marked this highpoint, and my maps weren't very detailed. I hiked three bumps in the vicinity to ascertain touching the top. Cairns or rocks marked all bumps, and I was confident this peak had been bagged. Signs directed me further to top Lewis Peak, a slightly lower mountain to the west. Some ups and downs on trail led me to this bonus peak, and I gained the fine vista of Ogden, below. Ben Lomond (top photo) was seen to the north, my main peak goal for this trip. 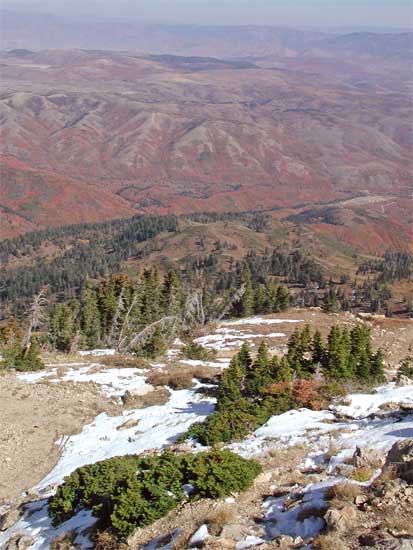 I retraced my route back, catching a bump that I missed on my ascent. Most bumps had trails going around them, as well as to their tops. Plenty of good color was seen on the ranges in all directions, with the Great Salt Lake to the west.

Back to my car, I motored off to get my reserved motel room at a fair rate, although I saw much lower rates were to be gotten elsewhere, if I had known. Travel here, this time of year, is very accomodating, with the sights of nature to be affordably reached. I managed a quick walk of the historic part of Ogden as magic hour passed.

Saturday was my biggest hike day. I motored up again to North Ogden Divide to start my second peak hike by 7:45 a.m. The Skyline Trail leads to Ben Lomond, the prominent peak as seen to the north, from Ogden. Nearby Willard Peak is a bit higher, and also is the highpoint of Weber County, but is a drive-up, with 4WD. I had hoped to bag three peaks, but reality set in, as I am just too slow.

Motorbikes, some with bow hunters, puttered up this trail. This area is not wilderness, but I thought of such noisy and fuming machines as a possible savior in the event of a freak accident. Luckily, as always, no such turn in my luck was to plague me today. Mountain bikes also use this trail. My hiking was fast. I gained the high ridge after about two hours, and enjoyed the views of the civilized valley below. You'll have to like the sight of sprawling towns to enjoy the Wasatch Mountains! 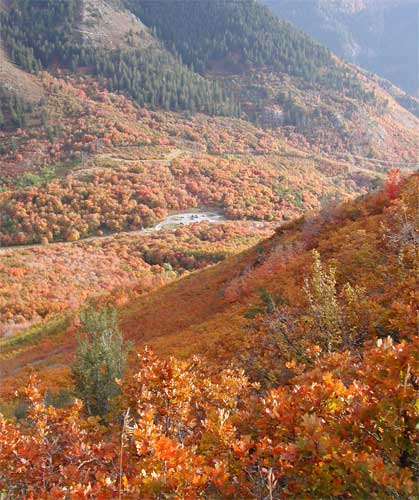 Seeing other hikers who had started ahead of me, I stopped to chat with a few. I encountered some snow, and captured the beauty of this early winter sight, here (second photo). Topping out after some five hours of hiking, more hikers also stood about the summit. They reported some mountain goats on the way along to Willard Peak. I chose to rest, and forgo the extra hike to the highest peak, and contented myself with Ben Lomond. This was signed as a 8.2 mile hike, each way, with the 5.5 miles, each way, yesterday.

There is a register, with a book 2/3's filled with this year's entries. Hundreds of people sign in.

After water and a rest, I started back down. Chilly Peak, a bump along the ridge, awaited me. Back to the use trail that leads up this secondary bump, I contemplated my chances. It looked to be short, but with some scrambling. I decided to bag it, with it's funny name, and the short climb proved to be a snap. No register, but with a lone rock as cairn, I snapped photos of my trivial, 15-20 minute, off trail, venture. It has an easy, gentle, slope to the south, so I took that back to the trail.

With the late afternoon, I slowed to photograph the colors and light. This will do, for finishing my long-term, state-wide tour of Utah fall color ops. The North Wasatch is different from the rest of the range, and state.

Back to my car, I drove down the scenic and also colorful highway, and came back to town and my motel. Washing up, I sought to get a nice meal. I tried to lose weight on this trip, as advised by my medical professionals, since I may have some coming, serious, issues, now, from being so overweight.