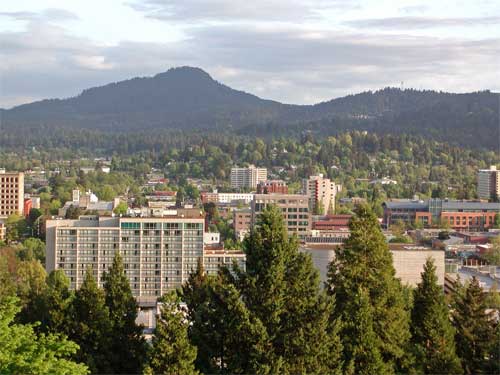 This is what I have saved and scrimped for--another peaks adventure. I e-mailed the land managing agencies for road openings dates, and conditions. They were slow to answer, if at all. Seeing an unbelievable long spell of good weather forecast, I chose to take off Thursday, the 11th.

I left home at 8:25 a.m. and motored, with a traffic jam detour necessitated up CA 113, promptly north on Interstate 5. Filling my tank at 3.119, I was to stop a few times this day, for food, drink, and rests. In a few hours, I was at the USFS ranger station in Mt. Shasta City, checking on that lovely mountain. I had halfway wondered about bringing along my skis to tour up to Lake Helen, and perhaps partway up Mt. Hood, but decided against it.

Passing through the various, nicely set, Southern Oregon towns on the Interstate, with Ashland, Medford, Grants Pass, and Roseburg, I approached Eugene, OR, in late afternoon. I parked in their trendy downtown area, and strolled about a bit. Motoring up Skinner Butte, I enjoyed the late afternoon sun cast over on the taller buildings, and looked south upon Spencer Butte, a point I was later to hike.

I obtained reasonable and reliable lodging, as I was to do each night of this trip. I had made reservations by the Internet, sparing me an even more, few dollars, for the low room rates, for three nights in Portland. Retiring to my motel, then, I thought to try to feast a bit better on the fine dining available in the Pacific Northwest.

Getting up by about 6 or 6:30 a.m., I was always up and off. I have my standard drink in the morning, a diet cola, and usually a breakfast sandwich. Then, I take off for the day's destination.

This Friday, I headed for Corvallis, OR, and Mary's Peak. This is the highest point of the northern Oregon Coast Range, Benton County, and is a near drive-up, then being an easy start to my little adventure. I took OR 34 west into the hills, and turned north on an all paved approach road toward the top. I arrived to a huge parking lot, where the fee station was neglected. There were no envelopes. I hiked the short dirt road to the top, and the views were hazy through the clouds. A few other hikers were visiting this summit, today. So then, back to the Interstate, I headed north. 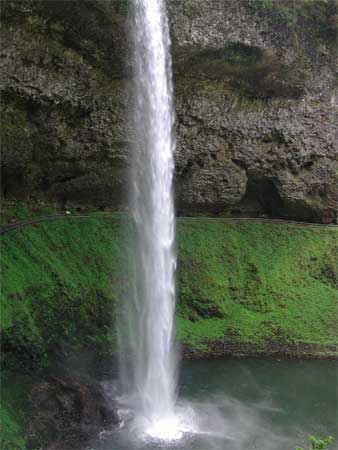 My next destination was OR 22, and Silver Creek Falls State Park. I motored along on country byways, and shortly came to this magnificent Oregon State Park. I paid the day use fee by machine, and hiking down a cobbled stone trail, viewed the South Falls. It is a 177 foot high falls, spilling over a deep horizontal cleft in the rock. A trail is built along this cleft, allowing for an angle of view from under or behind the falling water. I shot many photos and movie clips, and captured some interesting views. The trail makes a loop, and I was back to the top of the Falls. I left to motor north, over to the much smaller Winter Falls, and hiked down that trail, too.

Coming to the parking lot for the North Falls, I ambled down the trail. My travel book mentions that these would be national parks if not for the fact that this was Oregon. I never had seen these falls from any photo, and was completely surprised how the incredible geology ran, here.

I had to get to Portland this night, so motored north on OR 214. I made quick stops in Silverton, and Mt. Angel, OR. These are interesting towns. Back to the Interstate at Woodburn, I came into South Portland. Checking into my motel, I was set for the next three nights. Then, it was time to check out some vista points of the city.

First going to Council Crest, I was disappointed that no clear view of the downtown area was available to the general public. The tall trees would have to be cut. Sacrilege. Some homes had tremendous window vistas, but alas, not one inch of this could be accessed, by me, with my poor knowledge of the hills, here.

Motoring the short way into downtown Portland, I fed a meter, and strolled about, enjoying the city. The highrises were interesting, and the streets were nice. I snapped away with my digital cameras, and came to Pioneer Square. The evening temperatures were pleasant, and I certainly wish to do this again. Life is so short!

Motoring up and over to Washington Park, I sought vainly, again, to secure a great photo. I asked people, but they came up with no sure thing. Pittock Mansion, where I had already been on a 2003 road trip, had the only good panorama that I knew of. I hiked the Overlook Trail, hoping it might be better developed, more, in 2006, for this, but no dice, again. In the twilight, I visited the nearby Vietnam Veterans Memorial.

I slept well every night, with the comfort that I formerly disdained. Many long, past, nights of traveling, I spent time looking for cheaper lodging or camping. It's nice to have arrangements already set and made. A good shower, too, helps on any tick inspection, and I like cable TV.

So then, the weekend was here. I got gas at 2.979, then headed west, Saturday morning, on U.S. 26. The mountains here aren't much to see from afar. The dense fir and spruce forests are better hiked through, to see the thickets of ancient forest undergrowth, and the nice wildflower bloom. There are a few vertical cliffs, and some mildly spectacular geology to be noted, though. 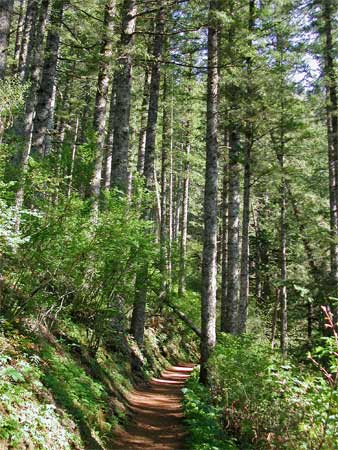 I am always surprised by the effort the government had made to make these peaks accessible. The side road to Saddle Mountain State Park is modest, but impressive. Cut through vast forests, the narrow roads wind and curve along, and I had my car window open to hear oncoming traffic. The forest silence was inspiring. In several miles, I came to the parking lot and facilities.

Starting my climb by 9:24 a.m., I headed up the trail. The forests are awesome, but it was difficult to get a great photo. I had harsh sun all of the trip, and most professional pictures within the ancient forests are done in diffuse light, in fog or overcast. However, the sun made for better wildflower close-ups.

The footpath climbs up, then down to a small saddle. There was some wet ground. Mesh wire covers some steeper, short, and slippery spots on the trail. You can use stairs. Wooden steps lead up the final, steep, stretch of trail.

I topped out at 10:47 a.m., a fair time for the 1,600' gain. The view was hazy, and the peaks all seemed backlit. I wished I had brought more Kodachrome for the polarizing lens I use to clear up the haze. I had only two 36-exposure rolls, as back-up, and for possible prints. So, I had to be sparing on shooting film.

Clicking away with my digital cameras, I saw as usual, many clear cuts, seen from most any vista point in this part of the state. Saddle Mountain is the highpoint of Clatsop County. None of the other mountains are that much to see, compared with other higher and rockier ranges, with this being a state forest. The distant Pacific Ocean and the town of Astoria were the main features to be seen. Some other peaks seemed higher.

Sharing the summit with a few others, I soon headed down. So many hikers were coming up. A few dozen people were out to enjoy, here, today. I stopped for more close-ups of the flowers, and soon was back down in dense forest. Side light and my polarizer made for some nice slides.

Back to the car, I soon motored back to the main highway, and continued west on U.S. 26 toward the ocean. I stopped at a signed point where the largest Sitka Spruce grew. Many tourists were stopping, too. It was nice for photos, as in California with the Giant Sequoias. I deem it worthwhile to see these specimens, appreciative of trees. 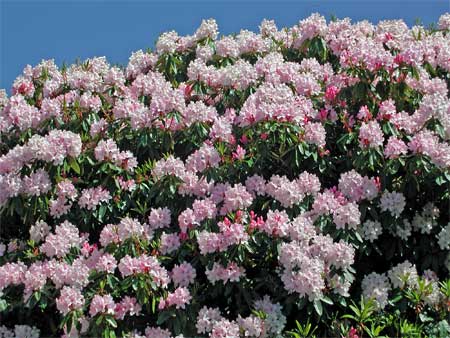 Onto U.S. 101, I headed north. Bypassing Seaside, I headed for Astoria. With a stop at historic Fort Clatsop National Park, where the Lewis and Clark Expedition had wintered, I motored along some back roads, and came to the main streets through town. I then figured on re-visiting the Astoria Column. Lovely gardens with well-tended rhododendrons made for photos. I motored up to the high hill, and paid the parking fee.

The spiral staircase within the concrete tube climbs to the nicest vistas of the Pacific Northwest. Saddle Mountain made the sight to the south. Astoria is a colorful town, and I snapped away with all my cameras. This was an afternoon visit, as opposed to my morning visit on my 2004 trip. The light would be different.

Back to town, I then resolved to motor back to Portland via U.S. 30. Some smaller towns, of not much interest, were passed through, and I snapped photos as I could. There is only one good view of the Columbia River, as you approach Rainier, OR. The official vista point is driven to, only on the westbound side of the divided highway, mainly with a sight of industrial development.

I had lots of time, so motored along without rush. I shortly came into Portland, and then was on a freeway, headed back to my motel. I had a nice meal, and soon was charging up my camera batteries and watching TV.