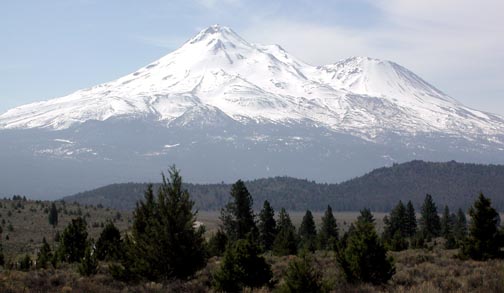 Taking three or four false starts beforehand, I was finally able to really get going on my Spring road trip, to places heretofore never visited by myself. I kept a close watch on the weather.com forecasts before stopping my mail and committing to this trip.

Wednesday, all seemed clear for the Pacific Northwest. A big high pressure ridge was settling over Oregon and Washington States. Soon, it would be too warm for the desert, and the grassy, green hills would dry up.

Packing up my gear, I left home early in the morning. A week or two earlier, I had reached Corning, CA, to then choose to turn back. Then, I was getting sleepy at the wheel, due to a sleepless night beforehand. Also, clouds to the north worried me a bit. Can't afford to spend my money unless I get the best of conditions.

This time, I speedily motored north on Interstate 5, then took U.S. 97 toward Klamath Falls, OR. The usual northerly view back to Mt. Shasta (photo top) was allright, but I have seen that many a time. The highway, OR 140, east to Lakeview, OR, showed on one map as scenic. I found it interesting, but it would be a bad or misleading ranking to compare it with, say, the Oregon Coast highway, U.S. 101.

North of Lakeview, OR, the high clouds made the view of Lake Abert dismal, being mostly gray of color, but with its whitish alkaline lakeshore a feature of note. I had always wished to know what U.S. 395 looks like, outside of California. Nothing like having the High Sierra to your west! Vast reaches of sagebrush and rolling hills, with a butte or two in the distance, make this a long drive for a peak bagger. There is a lower speed limit in most parts of this state, which I like. It saves fuel, and allows for enjoying the scenery.

I came to Burns, OR, by late afternoon, and walked about the historic district, as I did for many towns. I obtained an inexpensive motel room, and devoured the first of many footlong sandwiches.

The next morning, the power was out. I couldn't get gas or food. All I could do was motor on. Luckily, I had a few gallons of fuel left in my tank. Some small forests and then a canyon marked the U.S. 395 roadway. I was to pass through the town of John Day, OR. Breakfast and fuel were had here. The still snowy Strawberry Range can be seen rising high above, from the city park. 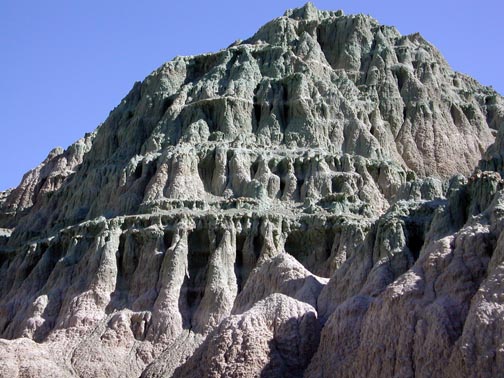 Taking U.S. 26 westbound, my goal for this day was to visit all three units of the John Day Fossil Beds National Monument. These are all free to enter, being so remote, and with such little services, I suppose. I hiked the Island in Time Trail, first, which has many a short footbridge, and some interesting geology (left photo). I investigated other trails, snapping many photos.

The next stop was Painted Hills. I enjoyed the view from the overlook trail, and also hiked the short Painted Cove Trail. Many might think these preserved areas are overrated for scenic beauty. Indeed, my offering a free carpool for this trip went ignored. No big peaks to climb, here, on my trip agenda!

Motoring north then east, lastly, I did some light hiking at the Clarno unit. An arch in some scenic cliffs made the interest here. Driving west on backcountry roads, I came to Antelope, then Shaniko, OR.

Taking U.S. 97 north, Mt. Hood and Mt. Adams were visible in the hazy distance. I came to the Columbia River Gorge at Biggs, OR. This major scenic feature does grow on you. Motoring west on Interstate 84 to the outskirts of Portland, OR, I obtained another motel room. Charging up my camera batteries, I got the TV weather news that record highs were again forecast for the area.

Friday, I took I-5 north to Kelso, WA. There, I found the big bridge that leads back into Oregon, and to U.S. 30. Then, I drove west to Astoria, OR. Much ado is given to the 1805-06 Corps of Discovery, otherwise the Lewis and Clark Expedition. Attempting to find a waterborne passage to the Pacific Ocean, they indeed found the Columbia River, and rejoiced as they came to near here.

I stair-climbed the Astoria Column, a 125' high viewing tower, for nice local vistas. I strolled about the old part of town to snap away at the historic buildings. Spending more time here would be easily done, as everywhere I came to. Coming to U.S. 101 South, I then toured Seaside, OR, a typical tourist destination. Like many coastal towns in California, there is a long boardwalk. The Oregon Coast is quite developed, with no big wild areas like the Lost Coast in California. There is a coastal hiking trail, but it is only intermittent. Bikes are allowed along this highway, but, with narrow, or no, shoulder, nor bike lane, it seems a bit dangerous. I saw a few bike tourers, but I was glad I was driving a car.

Continuing south, I would stop in the various towns and snap photos. Plenty of official viewpoints and wide shoulders allowed for more great pictures. A ticket machine at Ecola State Park took my three dollars, but was a "must" visit for its spectacular view of coastline. Then, Cannon Beach was interesting.

My best peak for this trip was Neahkahnie Mountain, which has a short, 1.4 mile, trail to the top. The view southward is spectacular (lower photo). I was afraid that there would be no local high point to qualify it as a summit (there is), but I will count this and the other mountain as "peaks." 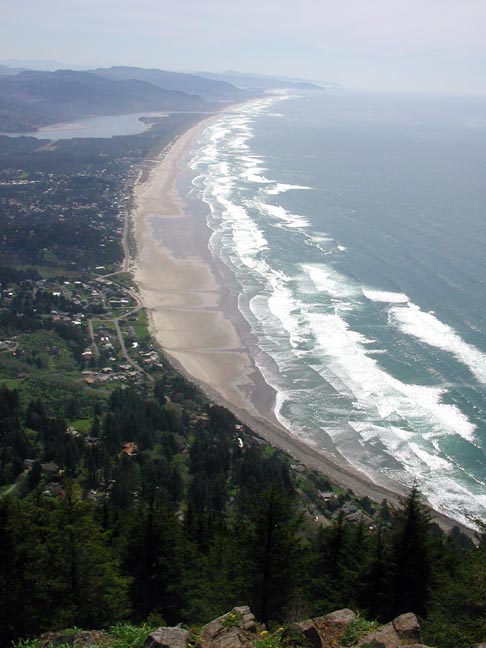 Making a stop in Tillamook, OR, I visited the cheese factory. Taking a side road, I hiked to Munson Falls. Then, I stopped for views of more from U.S. 101. Agate Beach was a sight to stop for, and walk.

Winding up with another affordable stay in a motel in Newport, OR, I slept well.

The next day was a repeat of the former. I shuttered many more photos as I motored south. A drive, sights to see, like the Dunes, Coos Bay, Bandon, Port Orford, then Humbug Mountain to hike, occupied me for this more southerly section of coastline. While the trail to the top of Humbug Mountain is nice, there is no great vista at the top. Trees block most of the view, and plain forested hills lie to the east. From the highway several miles south, a good view back, looking north to Humbug Mountain, lessened my disappointment.

Making dozens more quick photo stops at additional viewpoints and small towns, I spent my time. Crossing the state line into California, the gas prices went up to $2.25/gal. for regular. They were down to $1.789/gal. in Oregon. I walked on the beach in Crescent City, CA, had my dinner sandwich, then camped outside of town at a local county park.

Up at 4 a.m. the last day, I killed time at an all night restaurant, then continued motoring south. Low clouds or fog typified some of the coastal drive. I took a few scenic roads through Redwood forests, with many of my photos blurred due to the dimmer light deep in the dense forests, and shaky hands. I had to move too fast, so disdained using a tripod. I visted some more points of interest.

Spending some major time shooting buildings in both Arcata and Eureka, CA, I hope to return on another winter trip. These are now upscale, interesting towns!

Completing a drive, with short side hikes, down the Avenue of the Giants, I then was finished with most of my trip goals. The scenery south on U.S. 101 became more familiar to me, and most of it I can visit again on a shorter trip.

Cutting over east on CA 20, past Clear Lake, to the Central Valley and I-5, I finished my almost 1,900 mile loop. I suffered no hardware failure, or any glitch, in downloading my 860 MB worth of 1,250+ digital images to my computer. I shot some 65 frames of Kodachrome, too, for prints and back-up.

I had hiked, very roughly, 15 miles total, and did some 2,300' gain. I spent a bit more than $200, total. The one night camping ($10) had helped, with only a $40 room rate the lowest to be signed, there in California. Wearing up to generally three light layers, I was down to a long sleeved T with jeans, in the afternoons.

A few flowers were out, with no bugs to bother me. I spotted some elk calves in California, but not much wildlife sightings to report on, in Oregon. But, I seem to have gotten a few insect bites (?) on my arm, somehow.

Will I ever do this again? Maybe, with company. There are a few more coastal range summits I wish to climb, with plenty of other sights passed. And, if not for my diet, and frugality, I'd have partaken in more fine dining. I declined spending for even one bit of seafood, although free samples of Tillamook cheese were nice!