Opting on the spur of the moment to do exactly this, I enjoyed generally fantastic weather and lots of hiking and auto touring during this lengthy peak climb and road trip.

Getting my e-mail trip sheet for the DPS double climb of both Muddy Peak and the highpoint of the Muddy Mountains, two different peaks separated by a couple miles and roughly a thousand feet drop in-between, I made haste to prepare for what sort of trip I wasn't quite sure. I would determine my plans for each following day by viewing the TV weather report, studying the maps, and what seemed good to do and see. 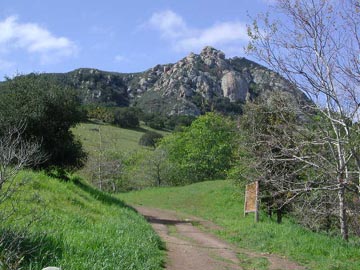 I thought of many alternate plans in case.

Leaving early midweek, I drove quickly to the vicinity of San Luis Obispo, CA, to climb the highest peak of the "Seven Morros," a chain of mountains from outside of town to Morro Rock. Bishop Peak (1,546') has a new trail built in part by local groups.

Starting up the signed dirt road, I noted a number of runners and hikers. The trail climbs nicely and wraps around to the west side of the peak. Upon reaching the main summit ridge, the official trail is signed, "End of Trail." I continued on a use trail, replete with poison oak, to what seemed to be the highest point, to the left (northwest).

Able to do some low class 3 moves, I gained the top of a rock adjacent to the true summit. The real top wasn't attainable for any regular hiker! Although the height difference is a matter of inches, I would not claim this as a peak ascent. I would need a partner and ropes to ascend to and touch the highest point.

I went back down and over to a secondary summit with better views of the town. My round trip time was some 2.6 hours. Frustrated, I deemed this an inauspicious start to my trip. I returned to my car parked on a subdivision street, and motored south along U.S. 101.

Coming to Pismo Beach, CA, I walked out to the pier and enjoyed the warmer, sunny weather, and the waves crashing on the beach. 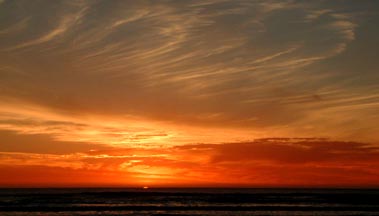 Wandering about, I found a good State Park campground and took a spot. Watching the sunset, I steeled myself for only a long drive, and coped mentally with my growing age that might curtail my climbing fun.

Up early the next morning, I continued south on 101 and came to the trailhead for Gaviota Peak. There is a self-pay use fee of $2, and I followed the mostly well signed dirt road to the summit, guessing correctly that the top was to the right (north) upon reaching the main ridge. I viewed the ocean below, and could see the oil platforms in the Santa Barbara Channel as well as the islands. The view was not as good as Net information led me to think, but at least I did climb to the top. Some higher summits southward along this ridge were too far distant to consider climbing them, also. My round trip time was some 3.3 hours.

Waking again at a good hour, I sped eastward to the Henderson Exit just before Las Vegas, and eventually motored on the northshore drive along Lake Mead. 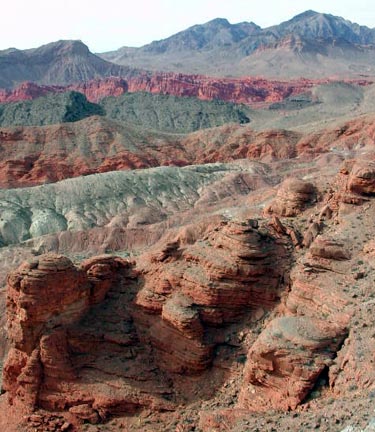 Gaining some good views of the Muddy Mountains, both from the road and a short trail, I looped about to the Valley of Fire State Park before taking the Bitter Spring road to meet the DPS group driving up this Friday evening. I had been assured that my passenger car should be able to drive to a meeting place set close to the start of the climb. I ran into rough spots and turned about to go back to a mine or rock quarry. I flagged down vehicles that began approaching in the night, and lo, each one was part of our group.

I stayed up late, camping on this pleasant evening, and, the next morning, I secured a ride in a member's 4WD truck. We drove to the meeting place for the 6:30 a.m. meeting time, and were then also able to drive the additional mile or so distance to the guidebook suggested parking.

Starting our climb at 6:58 a.m., we hiked over a low ridge and into the scenic Hidden Valley. The dirt track leads partway to the peak, and we climbed cross-country to the saddle that separates the peaks we wanted. Some unappealing steep and loose terrain took us up left to the main ridge where we could follow an intermittent use trail. The Muddy Peak summit mass is a long class 3 scramble, and looks steep. With the leader and one person who had climbed this before, we went hand over hand to the summit, reaching the top at 11:07 a.m.

I had been amazed that this would turn out so well for me personally. Before the generosity of the 4WD ride, my thinking I was had when I couldn't proceed further with my passenger car had me almost canceling to drive out and back home.

Following our ascent route back, we returned to the main saddle and found more use trails upward and westward through cliff bands and then gentle ridge walking. Topping out on our second peak, the range highpoint, at 2:46 p.m., we knew we had done well. Having climbed both named peak and range highpoint, no one could dispute that we had "bagged" the Muddies.

Ignoring a preplanned route down a side canyon, we more expediently returned by the same main saddle and then down the wash. The sun was sinking, and we sought to connect with the track that approaches the peaks. Having wished for some exploring, we couldn't find the track right away, and hiked faster to beat the oncoming night. An almost full moon and flashlights helped us reach our dirt track and then back over the low ridge. I was back to the trucks by 6:45 p.m. Again, a double success!

Motoring back to the quarry where we had camped and left cars, dinner was readied. I donated some crunchy chips and cookies, and the others brought out the wine with various munchies. A highlight for me was some sushi, one type with roe, I think. Hot lentil soup with rice revived me somewhat. I felt so aching stiff, all I could think of was to get a shower and a good night's sleep on a soft bed. We had a nice fire, and I offered a ride to do my big loop, all the way to Colorado and back. But, all had to work, and even just four nights gone was too much.